Spike in cases with returnees: Himanta 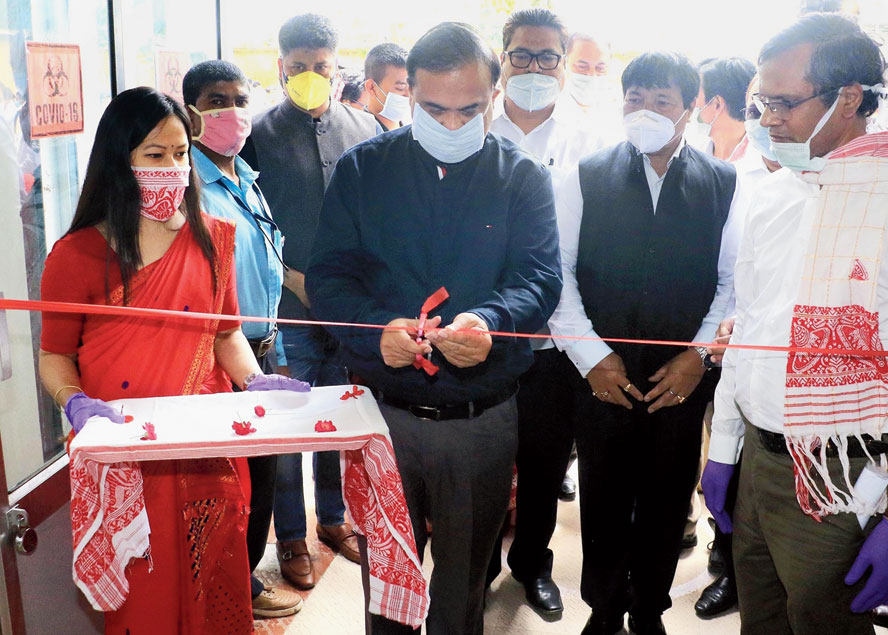 Covid-19 cases continued to rise in Assam, touching 1,185 by Saturday evening, with the government attributing it to increased testing over the past couple of days.

The day saw 128 new cases, taking the active cases to 1,015 while 163 patients have been discharged and four have died.

Inaugurating the CSIR-North East Institute of Science and Technology (CSIR-NEIST) laboratory in Jorhat, health minister Himanta Biswa Sarma said 8,000 samples had been tested in the state on Friday, leading to detection of more cases. “We are trying to conduct 10,000 tests in the next three to four days. More tests may result in more cases,” he added.

Sarma said the NEIST centre would take the number of testing centres to eight, after six medical colleges and the ICMR centre at Lahowal. “By June 15, the number of testing labs will go up to 12. Testing will soon start at Defence Research Laboratory under Defence Research and Development Organisation at Tezpur, Diphu Medical College and another lab at GMCH,” he said.

Sarma was hopeful that the rise in cases would subside by June 10, as the number of returnees would come down by then. He urged everyone to strictly follow quarantine rules to prevent community transmission which will be “difficult” to control. He urged the masses to inform the authorities if anyone tries to jump quarantine.

On Saturday, Sarma visited Golaghat where he interacted with district administration officials, doctors and quarantine centre inmates. He said hospitals at Kohora and Sarupathar would be converted into Covid hospitals, if necessary. He said the spike in cases in Golaghat was because of the return of natives from Chennai. Of the 172 cases detected in the district so far, 163 are active cases. Nine persons have been discharged. Sarma urged senior citizens to be more careful and strict in adhering to the lockdown norms.

In Dhubri district, 19 new Covid cases were detected in the past 24 hours, taking the total count to 34 so far. All the 14 persons found to be positive on Friday have been sent to Barpeta Medical College and Hospital while five patients found positive on Saturday will be kept in a special isolation ward at Dhubri civil hospital. These five patients will be the first batch to be kept in the district.

In Nagaland, the Covid count shot up to 36 with the detection of 11 positive cases on Saturday. Eight of them are from Dimapur and three from Kohima, health and family welfare minister S. Pangnyu Phom tweeted. He said all had returned from Chennai.

In an open letter to chief minister Neiphiu Rio on Saturday, NIDA president Dr Ritu Thurr and general secretary Dr John Kemp said under John’s leadership, the department was able to step up its preparedness and response to Covid-19 pandemic effectively. “Such ill-timed decision will have a rippling adverse affect on the morale of the department during this unprecedented crisis,” it said.

The letter demanded revoking of the transfer order, failing which it warned of action, which, it said, may affect the fight against Covid-19 and other health services.

Additional reporting by our special correspondent in Guwahati, Mukesh Kumar Singh in Dhubri and Bhadra Gogoi in Dimapur