Out of jail, brothers lynched 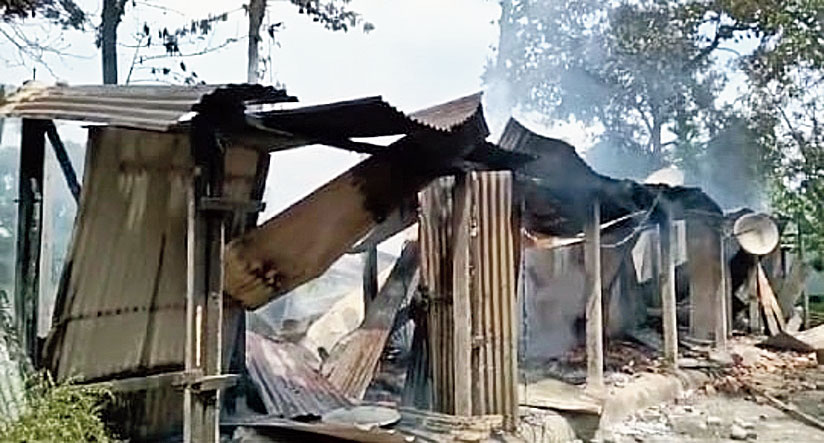 The torched houses of the victims at Athiabari village in Baksa district on Wednesday.
Picture by Shajid Khan
Shajid Khan   |   Udalguri   |   Published 22.04.20, 11:21 PM

Two brothers, both history-sheeters, were allegedly lynched by villagers at their house in Athiabari village near Simaluguri in lower Assam’s Baksa district bordering Barpeta district, 120km from Guwahati, around 8am on Wednesday.

Police suspect “village enmity” as the villagers were fed up with the victims’ criminal activities. The brothers had several cases of dacoity and extortion against them. They had been recently released from jail on bail following the Supreme Court’s directive to decongest prisons in the wake of the coronavirus pandemic.

After the mob attack, the victims, identified as Biswajit Das, 24, and Haradhan Das or Heba, 35, were taken to a local medical facility, where they were declared brought dead.

The mob also attacked their mother Subrata and Biswajit’s wife Priyanka, who are undergoing treatment in a hospital. Their condition is said to be stable. The mob also set their house ablaze.

A senior police official said, “There are reports that a scuffle broke out between some villagers and the brothers after which a group of villagers attacked them. Investigations are on to find out the cause of the scuffle.”

A villager said there was tension between the victims, who are natives of Athiabari, and the villagers because of the brothers’ criminal activities. The two had unleashed a reign of terror and invited the wrath of the villagers. Tension was brimming and this sparked the scuffle, he said but could not specify the exact cause .

Sources said the police have zeroed in on 5-10 persons and arrested two suspects, Bhola Sahani and Kanchan Debnath. Baksa police confirmed the arrests.

A Guwahati-based human right activist, condemning the killing, said, “Mob lynching and mob violence appear to have become the norm in the country. Police and administration have failed to check law and order even amid the lockdown.”