Unlike in previous elections, we are more comfortable and confident: Party 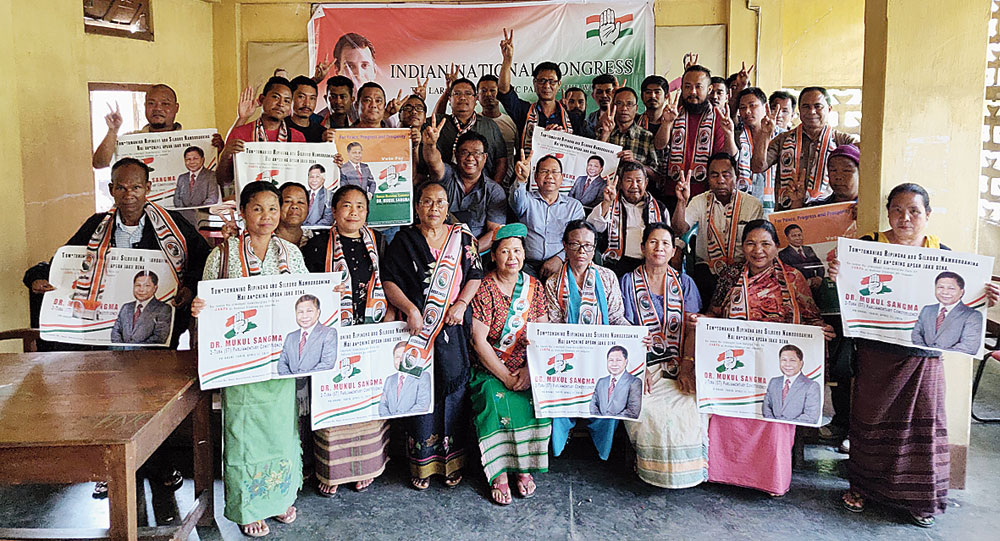 The Congress office here was filled with upbeat workers who are confidently working towards winning the Tura parliamentary seat.

The last time the Congress won the seat was in 1999 when former Lok Sabha Speaker Purno Agitok Sangma was elected. However, a few months later, Sangma parted ways with the Congress, ending an association which started in the 1970s.

Since 1977, the seat has been represented by either Sangma or his children, Agatha K. Sangma and Conrad K. Sangma, except for a brief period in the late 80s.

Senior Congress leader Grithalson Arengh told The Telegraph that the seat could come to the party this time. “Unlike in previous elections, we are more comfortable and confident,” he said.

On the reasons behind his confidence, he said the candidature of former chief minister Mukul M. Sangma had made a difference. “There is a wave in favour of our candidate. People are happy that the party has chosen him because they know his contributions, particularly when he was chief minister for eight years. He is one of the fittest leaders to represent Garo hills in the Lok Sabha,” he added.

From creation of new districts and sub-divisions to initiating various schemes and projects, Arengh listed many achievements of the previous Mukul government. “There were a number of militant groups in the past but now Garo hills is peaceful. This is one of the greatest contributions (of Mukul) to the people of Meghalaya and especially the Garo hills. No one can deny that,” Arengh said.

He also said a number of party functionaries and workers of the Nationalist Congress Party, the Garo National Council and the United Democratic Party are working for the Congress this time. Besides, many formers legislators, members of district councils and those who had contested in elections, have come forward to support Mukul, he added.

“Even in North and East Garo Hills, which are the vote-bank of the NPP, the wave is different this time. We will secure more votes,” Arengh claimed.

On the NPP candidate Agatha, he claimed the former MP had lost the people’s confidence.

“She had been an MP twice before she vacated the seat in 2014 to give way to her father. Then she became silent in politics. However, in the 2018 Assembly polls, she was forced to contest from South Tura. She won, but after a few months, she resigned to make way for her elder brother Conrad,” he said. He also said if Agatha is re-elected this time, there is an apprehension among the voters. “We do not want to see frequent elections,” Arengh said.

Moreover, he alleged that though the people had voted for Sangma and his family since 1977, they had made no contribution to Garo hills. “That is why people want a change,” Arengh claimed.

He said the BJP was behind the NPP. “It (NPP) did not withdraw support from the NDA while the BJP is part of the MDA government in the state. There is a link between the BJP and the NPP, which they cannot hide,” he said.

However, the BJP has put up its state vice-president Rikman G. Momin as its candidate from Tura.

Arengh said issues like beef ban, demonetisation, anti-conversion law, push for a uniform civil code, and the Citizenship (Amendment) Bill will work against the BJP.

When pointed out that Mukul had lost two parliamentary polls in the past, he said, “There had been a misinformation campaign on issues relating to MBOSE and others against him by his opponents. Those issues are no longer there.”

Another Congress worker pointed out that in 2004 and 2006, Mukul had fought against Sangma, and hence he was defeated but this time, the former chief minister was fighting against Agatha.

Arengh pointed out the Congress office here was inaugurated by Sangma in 1993 when he was a Union minister of state. “Yes, that is true. He (Sangma) had inaugurated it. He and his family were lifted by the Congress,” he added.

The Tura election will be one of the most-watched as two families are engaged in an electoral battle to gain supremacy over the other.