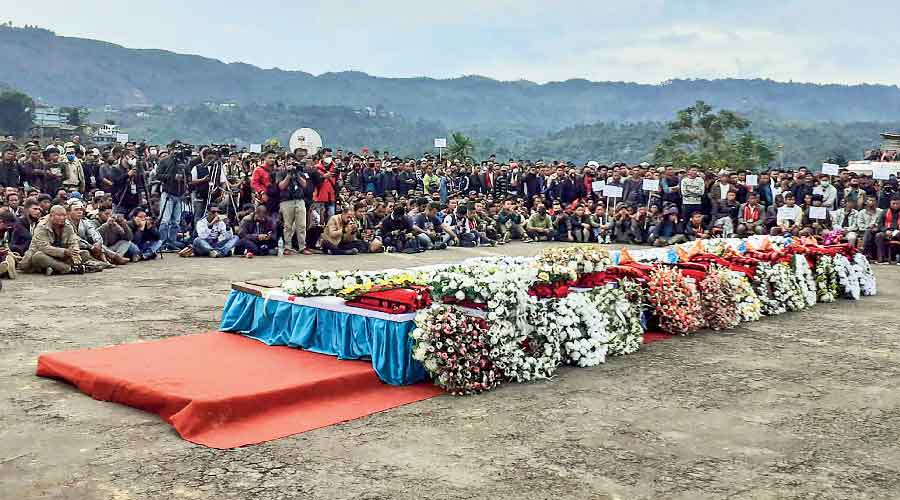 Coffins of 13 people, who were killed by the armed forces in two bursts on Saturday evening, during their funeral in Nagaland’s Mon district on Monday
PTI
Umanand Jaiswal , PTI   |   Guwahati/Kohima   |   Published 07.12.21, 02:25 AM

Meghalaya chief minister Conrad Sangma, a BJP ally like Rio, joined the chorus for the removal of the Armed Forces (Special Powers) Act, which gives the forces extraordinary powers to search, arrest and shoot. Addressing the funeral service of the slain civilians in an emotionally charged Mon town on Monday morning, Rio condemned the impunity that the AFSPA grants to the forces.

Rio, whose Nationalist Democratic Progressive Party (NDPP) is part of the NDA, said: “This case will not be taken as AFSPA. Action will be taken. There was indiscriminate firing. Investigation has started. We are with you (people of Mon), we are in it together.”

Officials said six of the 28 injured were critical. In the Lok Sabha, Nagaland MP T. Yepthomi, seeking an inquiry into the killings, said the operation was conducted by the 21 Para (commandos) “stationed in Assam” and not the Assam Rifles. The MP belongs to the ruling NDPP, like Rio.

The Mon-headquartered Konyak Union, the apex body of the Konyak tribe, sought the immediate repeal of the AFSPA from the entire Northeast and the removal of 27 Assam Rifles from Mon district for failing to “give security to its citizens” as military forces from another state had “intruded and committed” the massacre in Nagaland.

Chief minister Rio said: “It’s not only Nagaland and the human rights commission; even the world is debating the law (AFSPA). All want it removed. They (the Centre) say it cannot be removed until the Naga issue is resolved.”

Rio added: “Every year Nagaland is (termed) a disturbed state…. Everyone is in ceasefire, there is peace. Why then call it disturbed? Our (state) cabinet seeks removal (of the AFSPA) but Delhi extends it.”

The AFSPA is in force in four states of the Northeast — in Nagaland, Assam, Manipur (except the Imphal municipal area) and three districts and eight police stations of Arunachal Pradesh.

Rio later told reporters: “This is a draconian law. There can be many laws that can handle (the situation) but this law has blackened the image of the country.”

Sangma, whose National People’s Party too is in the NDA, demanded repeal of the AFSPA in a tweet and then a video message, asserting the law had proved counter-productive and caused only unrest and the loss of lives.

Pradyot Kishore Manikya Debbarma, scion of the Tripura royal family and leader of the regional party Tipra Motha, tweeted: “We the indigenous people of Tripura stand with Nagaland #RepealAFSPA.”

The North East Students’ Organisation, an umbrella body of eight leading students’ organisations in the region, echoed the demand.

After the funeral service, Rio met civil society groups and the influential Eastern Nagaland People’s Organisation to seek their cooperation in calming tensions.

The Naga Students’ Federation has announced five days of mourning, asking people not to participate in any celebrations.

The government cancelled Monday’s events at the Hornbill Festival, an annual 10-day extravaganza that showcases Naga traditions. The festival began on December 1 and has attracted thousands of tourists from across the country and abroad. Several tribes had decided to refrain from participating in the event.

According to the police, the forces on Saturday evening mistook coalmine workers returning home in a pickup van for militants and fired, killing six.

Local villagers then attacked army vehicles, the clash killing seven civilians and one soldier. The violence spilled over into Sunday afternoon with angry mobs vandalising and torching an Assam Rifles camp. One more civilian died in the forces’ firing.

“They (the victims) have not sacrificed their lives for India but for the Nagas,” Rio said.

He announced an ex gratia of Rs 5 lakh for the family of each of those killed and Rs 1 lakh for each injured.

Rio said Union home minister Amit Shah had announced an ex gratia of Rs 11 lakh and a government job for the family of each of the dead.

The bodies of the dead reached Oting village to wails of despair around 5.30pm on Monday. Oting is a village of around 1,000 people, mostly engaged in agriculture. Many are day labourers. Working in the coalmines is a seasonal occupation.

A common memorial stone will be erected at the Mon district headquarters in the victims’ honour, officials said.

The Assam Rifles lesson for Manipur