Assam team heads to Tamil Nadu for return of elephants

The decision to constitute and send the team was taken following media reports about the 'inhumane treatment' meted out to Joymala, one of the nine elephants 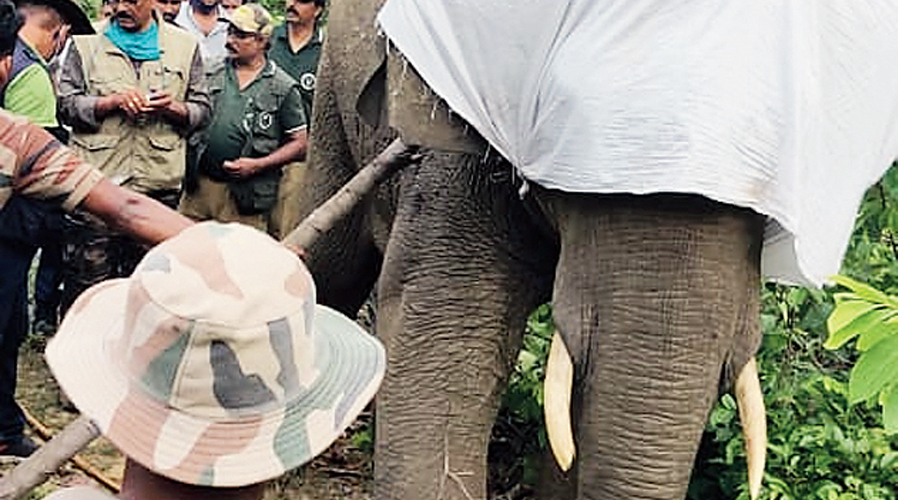 The Assam government on Friday sent a four-member team to Tamil Nadu to hold discussion with forest department officials there to “pave the way” for the immediate return of nine elephants held captive at various temples in the southern state after assessing their health condition.

The decision to constitute and send the team was taken at a meeting convened by chief minister Himanta Biswa Sarma on Thursday night following media reports about the “inhumane treatment” meted out to Joymala, one of the nine elephants. Senior officials of the forest department, led by minister Chandramohan Patowary, attended the meeting.

Attention was drawn to the condition of the elephants after a video was released by the People for the Ethical Treatment of Animals (PETA) India on August 26 showing a mahout torturing Joymala.

The 16-year-old female elephant from Assam’s Tinsukia district was leased to Nachiyaar Temple in Tamil Nadu’s Virudhunagar district for a period of three years in 2011. Sarma said the four-member team included forest, veterinary and police officials.

“The team will visit Tamil Nadu on September 2 to discuss the matter with forest department officials there, inspect the elephant and pave the way for its return to Assam... We are against any form of cruelty to animals. Hence, reports of ill-treatment to Joymala, an elephant from Assam, in Tamil Nadu have pained us...,” Sarma said.

Joymala was leased out to the temple after her owner Girin Mohan found “her upkeep difficult” following the Supreme Court ban on tree felling in neighbouring Arunachal Pradesh.

She was rechristened Jeymalyatha by the temple authorities.M.K. Yadava, principal chief conservator of forests and head of forest force (PCCF & HOFF), who had been in touch with his counterparts in Tamil Nadu to get Joymala back to Assam for nearly a year, told The Telegraph that the team, led by Hirdesh Mishra (additional principal chief conservator of forests, Upper Assam Zone), had gone to discuss the return of the nine elephants to Assam with senior forest officials in Tamil Nadu.

The Assam team will also visit the places in Tamil Nadu where the nine elephants are held in captivity and asses their health condition.

The team will have to submit its report to the PCCF & HOFF on completion of their visit.   Besides Mishra, the other members of the team are Padmashree Dr Kushal Kumar Sarma, professor at the College of Veterinary Science, Assam Agriculture University; Morigaon superintendent of police Aparna Natarajan; and Tinsukia district veterinary and animal husbandry officer Dr Rupjyoti Kakoti.“Elephants can’t be sold but can be handed over to someone or some organisations for a specific period. Now that the transit permit has expired, the elephants have to be returned to the original owner. The Assam government is also ready to bear all expenses to get the elephants back,” an official said.

In the no-objection certificate to allow the entry of domestic elephant into Tamil Nadu issued by the Assam chief wildlife warden on August 26, 2011, it was mentioned that the owner had sought permission to transport Joymala to the Nachiyar temple “for engaging in religious activities”. Joymala was transported to the temple only after receiving the approval of the Tamil Nadu chief wildlife warden in accordance with the rules.Girin Mohan, Joymala’s owner, told The Telegraph that he was shocked to see the torture meted out to the elephant. “I request the state government to get her back and nurse her back to health,” he said.    Sending elephants from Assam and Arunachal Pradesh to southern states is nothing new. Assam has the second highest population of elephants, over 5,700, in the country, an official said.