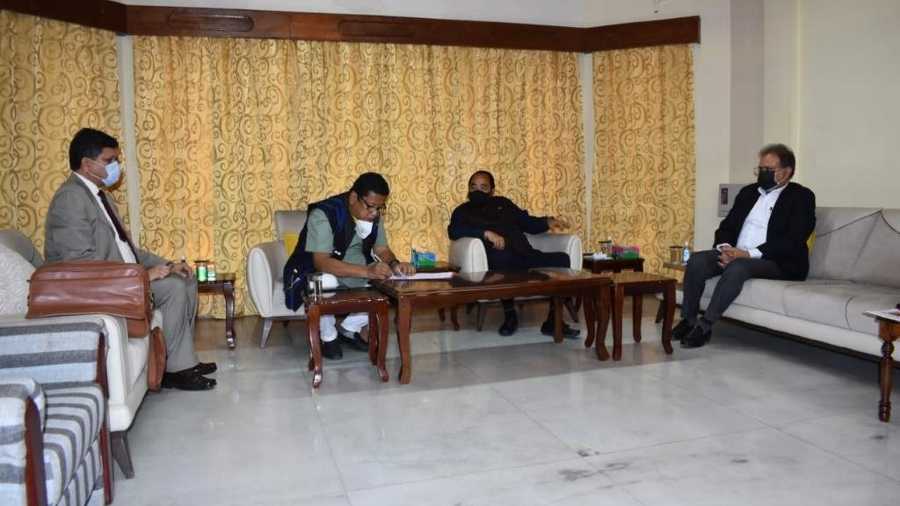 The Chief Secretaries of Assam and Nagaland on Saturday signed an agreement to de-escalate tense situation prevailing at two locations in the Dessoi valley forest/Tsurangkong valley by simultaneously withdrawing security forces within the next 24-hours.

Both sides agreed that in order to maintain peace and tranquility in the areas around Ao Senden village and Vikuto village as they are known in Nagaland and called as Jankhona Nala / Nagajankha and Compartment No. 12 respectively in Assam, urgent and effective steps are required for defusing the standoff between the security forces of Nagaland and Assam.

Nagaland and Assam shall monitor the area by surveillance using UAV (Unmanned Aerial Vehicle) and satellite imagery with a view to maintaining the status quo.

The meeting also decided that the Superintendents of Police of the districts of Mokokchung (Nagaland) and Jorhat (Assam) shall ensure orderly withdrawal of their respective forces and shall be responsible for it.

Patton told media persons after the meeting that the chief ministers of both the states had discussions on the border issue with Union Home Minister Amit Shah on July 24 and 25 in Shillong and it was agreed in principle to withdraw the forces and accordingly the agreement was signed Saturday.

Discussions were held only for the particular area but the issues related to other areas along the interstate border will also be taken up subsequently, he said.

On travellers from Nagaland facing problems while crossing into the neighbouring state, Patton said Assam government has agreed not to stop or check commuters from Nagaland.

Assam Education Minister lauded the statesmanship of the union home minister and the chief ministers of both the states in taking steps to resolve the border issue and hoped that the cordial relationship between the two states will be maintained.

Assam Chief Minister Himanta Biswa Sarma said that in a major breakthrough towards de-escalating tensions at Assam-Nagaland border, the two chief secretaries have arrived at an understanding to immediately withdraw states' forces from border locations to their respective base camps.

"This is a historic step in our relations. My gratitude to Nagaland chief minister Neiphiu_Rio for working with Assam in restoring peace at the border", Sarma tweeted.

This is a historic step in our relations. My gratitude to HCM Sri @Neiphiu_Rio for working with #Assam in restoring peace on the border.

Assam is committed to ensuring peace along all its borders & strives for social & economic prosperity of #NorthEast region. 2/2@AmitShah pic.twitter.com/IyQXuuID0u

Assam is committed to ensuring peace along all its borders and strives for social and economic prosperity of Northeast region, he added.

Assam's longest border dispute is with Nagaland, which began since the creation of the state in 1963.

The Nagaland State Act of 1962 had defined its borders according to the 1925 notification when Naga Hills and Tuensang Area (NHTA) were integrated into a new administrative unit and made an autonomous area.

Nagaland, however, did not accept the boundary delineation and demanded that the new state should comprise the Naga Hills and all Naga- dominated area in North Cachar and Nagaon districts, which were part of Naga territory, created by the British according to the 1866 notification.

Since Nagaland did not accept its notified borders, tensions between Assam and Nagaland soon flared up resulting in the first border clashes in 1965 and this was followed by major clashes between the two states along the border in 1968, 1979, 1985, 2007 and 2014.

The Assam government had filed a case in the Supreme Court for identification of boundary and resolving border disputes which is still pending.