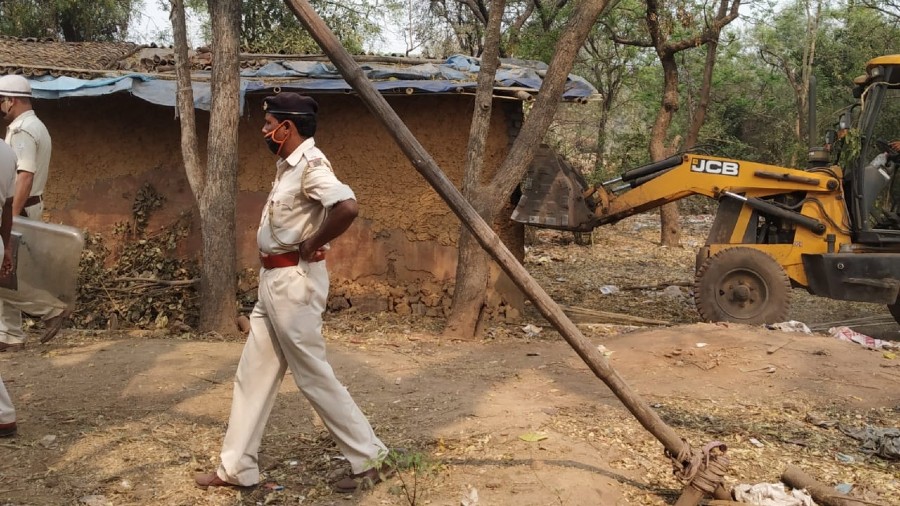 The Assam government on Monday launched a two-day eviction drive to remove illegal settlers from the Lumding reserve forest in Hojai district in compliance with a Gauhati High Court order, officials said.

This comes a month and a half after an anti-encroachment exercise in the Gorukhuti area of Darrang district in which two people were killed and over 20 injured.

The eviction drive was peaceful on Monday as most of the people had left the place in the last few days following counselling by the district administration about the high court order to make the forest encroachment-free, Hojai Deputy Commissioner Anupam Choudhury said.

Tight security measures were in place with the deployment of seven additional companies, including four CRPF and three Assam Police battalions, to prevent any untoward incident during the exercise.

The forest, a major habitat for elephants, is spread over 22,403 hectares of land out of which 500 hectares are under encroachment at present, an official said.

In the first phase, the drive was conducted in Kamarpani and Betnala areas of the forest, Choudhury said.

The district administration has engaged elephants of the forest department and requisitioned excavators to clear the land. The illegal settlers belong to a mixed population of the minority and tribal communities.

Assam chief minister Himanta Biswa Sarma told reporters in Guwahati that most of the illegal settlers have land in different places and they mostly encroach for agriculture or business purposes.

“The eviction is going on peacefully and the administration will have to carry it out as the high court has given an order. The government is committed to follow the order and will do so through dialogue and not by force,” Sarma said.

Hojai’s former BJP MLA Shiladiitya Dev had filed a PIL in the Gauhati High Court early this year following which the court passed an order on September 14 to make the forest encroachment-free.

The state government had submitted before the court that the eviction would be carried out in phases.

Special director general of police (law and order) G.P. Singh in a recent visit to the district had said that most of the encroachers hailed from Nagaon, Morigaon, Barpeta, Dhubri and Kamrup districts with more than 80 per cent of them having their land and home in different places of the state.

The evicted people claimed that they had purchased the forest land from land brokers who are absconding.

Law enforcers have lodged an FIR against the land brokers and a hunt is on to nab them, a police officer said.

The Darrang district administration had carried out an eviction drive in Gorukhuti in Sipajhar area in September to clear encroached land in riverine areas near the Dholpur Shiva Mandir which led to violence, resulting in the death of two persons, including a 12-year old boy. Several policemen were among the 20 injured in the incident.