The GNM nurses had protested the grant of higher pay to BSc nurses, but the govt has now agreed to raise their grade pay 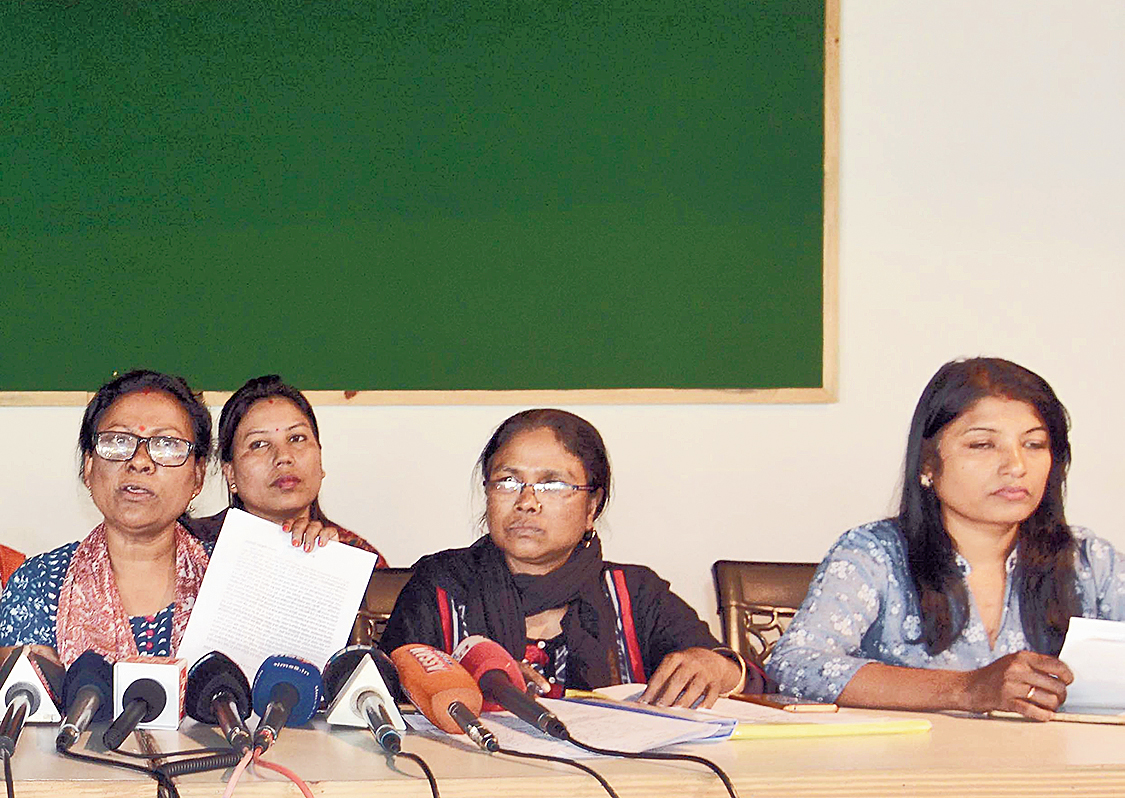 Members of the All Assam Nurses Association address the news conference in Guwahati on Friday.
Picture by UB Photos
A Staff Reporter   |   Guwahati   |   Published 30.11.18, 07:45 PM

General nursing and midwifery (GNM) staff nurses in Assam on Friday called off their strike “temporarily” and joined duty from 2 pm amid reports that two pregnant women had died at Jorhat Medical College and Hospital (JMCH) during the agitation.

The All Assam Nurses Association, an association of the GNM staff nurses, had launched the protest on Monday demanding “same salary for same post”.

Though the JMCH claimed the two women were admitted in a critical condition and their subsequent deaths had no connection with the strike, association president Anjana Saikia Sarma on Friday said she had learnt from the media that the deaths occurred because of the agitation.

“We do not have information about anyone dying because of the agitation. We had deployed other nurses during the strike,” said Rathin Bhuyan, director of health. During the agitation, government hospitals had deployed students of BSc (nursing) courses and nurses from private hospitals.

Following a meeting with the state government on Thursday, the association’s central body on Friday morning decided to rejoin duty from 2pm. They said Thursday’s meeting was “cordial”.

“We have withdrawn the agitation temporarily, considering the suffering of the patients. The government has promised to increase our grade pay and invited us for another round of talks on December 4. If we are not satisfied after the December 4 meet, we will re-launch the agitation,” said Junu Chutia Dehingia, general secretary of the association.

Earlier in the day, health minister Himanta Biswa Sarma had said the government would take strong measures if the nurses continued their agitation.

The protesters, who had joined nursing after completing a three-year diploma nursing course, highlighted the “disparity” of grade pay increase between them and those who joined nursing after completing a four-year BSc (nursing) course, under the 7th Pay Commission. The grade pay of graduate nurses is Rs 8,700 while it is Rs 6,800 for the agitating nurses. The pay was equal till the 6th Pay Commission.

The minutes of Thursday’s meeting, however, said “enhancement of existing grade pay of staff nurse having diploma qualification to Rs 8,700 was not found feasible”. It said the meeting agreed to consider increase the grade pay of the agitating nurses to Rs 7,400 and asked them to submit a “justification note”.

However, the conflict between Saikia Sarma and others led by Chutia Dehingia continued. Saikia Sarma skipped the association’s central body meeting on health grounds. She had announced the withdrawal of the agitation on Thursday evening but Chutia Dehingia said no leader can take a decision unilaterally. She also alleged that Saikia Sarma was “managed” by the government which the latter denied.

“The decision for launching the agitation was a collective one. The withdrawal should also be a collective one. So we met this morning, discussed yesterday’s meeting, before deciding to withdraw the agitation,” Chutia Dehingia said. Saikia Sarma told The Telegraph that she was thinking of resigning from the president’s post.