The blaze has caused extensive damage within a 1.5km radius of the affected site 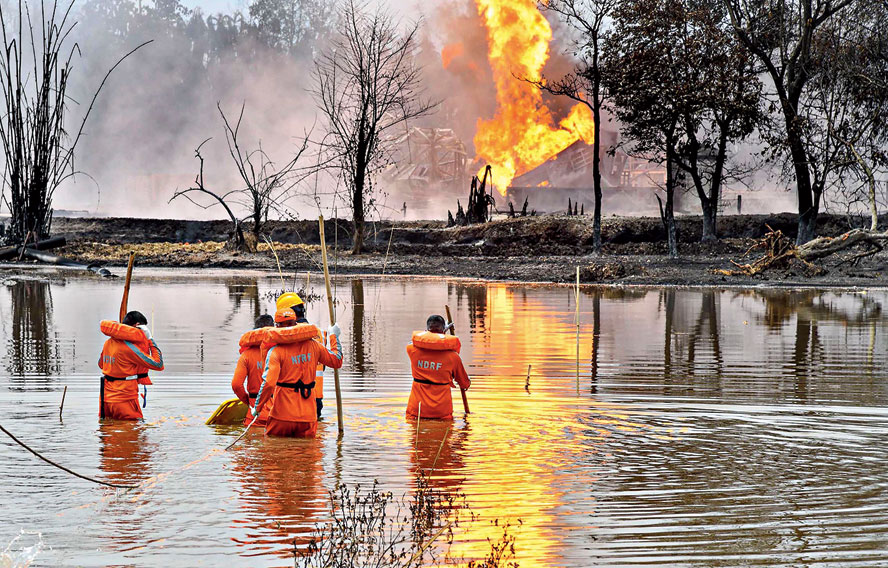 The fire that broke out in an Oil India well at Baghjan in Assam’s Tinsukia district on Tuesday afternoon has claimed the lives of two firefighters.

The bodies of Oil India firefighters Durlov Gogoi, 35, and Tikheswar Gohain, 55, were brought out on Wednesday by disaster response force personnel from a pond which they had probably jumped into to escape the blaze.

Durlov used to play for the Oil India football team, a big name in state football.

The fire in the gas well has caused extensive damage within a 1.5km radius of the affected site. Two Oil India officials have been suspended.

Amid the palpable anger among residents of the neighbourhood against Oil India for not being able to cap the May 27 well blowout, which gave way to a fire on the 14th day, there was a sense of loss at the deaths of the two employees of the company.

Baghjan resident Hemanta Moran said: “They were also our own. We have lost a lot but we have not lost our dear ones. Condolences to the families of the deceased.”

Four persons, two from Oil India, one from ONGC and one employed by a contractor, sustained minor injuries and have been given medical help, an Oil India statement said. Fire tenders are spraying water to control the fire from spreading in the surrounding areas. Arrangement of more water for controlling the blaze is in progress, the statement said.

By evening, action was initiated against two officials. “They have been suspended and an inquiry is on. That is why we are not officially releasing their names,” a senior Oil India official said.

Senior cabinet minister Chandra Mohan Patowary, who visited the site, said it will take at least 21 days to bring the fire under control.

An Oil India statement in the evening said as an immediate measure, it had constituted four teams — technical, arrangements and facilities, relief and rehabilitation and other issues — for effective execution of measures in the current crisis situation.

There was no change in the ground situation except that there was less smoke on Wednesday. Helplessness was writ large on the faces of the affected people, who have been shifted to 12 relief camps.

Television visuals showed several women crying. “We have lost everything. Our fields, bamboo groves, betelnut groves and livestock. We don’t know what to do,” one of them said.

The damage to the environment has also sparked concern. Aaranyak, a leading organisation on biodiversity conservation in the Northeast, has demanded Oil India to take full responsibility for restoring the environment and providing support to the affected people.