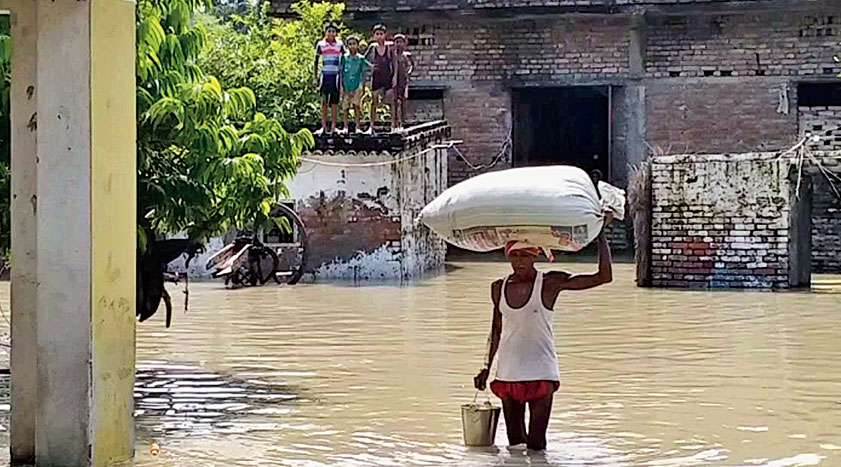 The flood in Assam maintained a  falling trend on Saturday with the waters ebbing from two districts and remaining in only four affecting 6,435 persons, an Assam State Disaster Management Authority (ASDMA) bulletin said. No death because of the  natural calamity was reported from any where in the state during the day.

The flood waters receded from Chirang and Kamrup Metropolitan districts and remained in Dhemaji, Baksa, Kokrajhar and Morigaon districts, according to the daily flood report of ASDMA.

The deluge had impacted 12528 people in six districts on Friday.

Baksa is the worst affected district followed by Dhemaji and Morigaon. In Baksa 98 villages have been inundated by the flood waters affecting 2000 people. In Dhemaji 1958 people are in the grip of the flood, while in Morigaon the figure is 1718, the report said.

With the flood situation improving, only one relief camp and distribution centre is being operated by Dhemaji district administration providing shelter to 73 people.

Brahmaputra river is, however, flowing above the danger mark at Neamatighat in Jorhat district, the ASDMA bulletin said.

In Kaziranga National Park, a UNESCO World Heritage site, and Rajiv Gandhi Orang National Park none of the forest camps are submerged.

One hundred thirty six people have lost their lives in Assam in this year's flood and landslide. Of them 110 were killed by flood related incidents and 26 in landslides.

The current wave of floods has so far claimed the lives of 157 animals and another 174 others were rescued in Kaziranga National Park, the ASDMA bulletin said quoting the divisional forest officer of the Eastern Assam Wildlife Division.