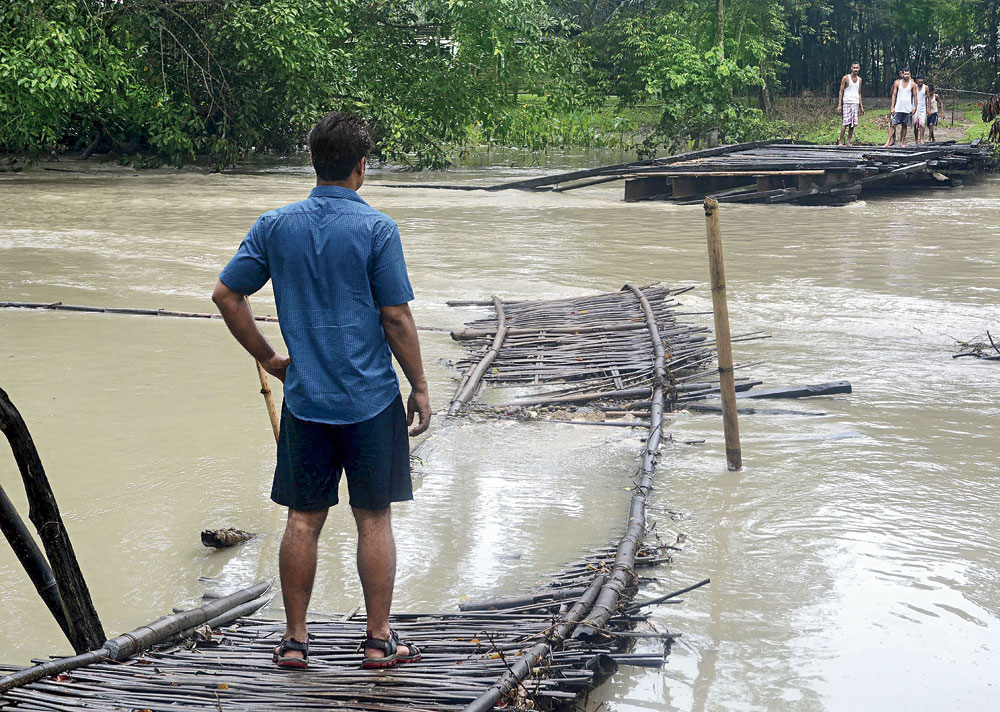 Assam water resources minister Keshab Mahanta told the Assembly on Wednesday that 295 of the state’s 423 embankments have outlived their life spans.

The statement came on a day floodwaters continued to submerge 12 districts of the state, affecting 5.18 lakh people. Breach of embankments has been seen as one of the prime reasons for people’s suffering during this flood.

“Altogether 5,18,623 people in 691 villages in 26 revenue circles of 12 districts — Dhemaji, Lakhimpur, Darrang, Barpeta, Nalbari, Chirang, Kokrajhar, Goalpara, Kamrup, Morigaon, Nagaon, and Jorhat — have been affected by flood waters,” the Assam State Disaster Management Authority said in the evening. It added that water levels have shown a receding trend in all districts in the last 24 hours.”

While the overall flood situation improved in the state, heavy rain in Tinsukia district since Tuesday night brought back the threat of floods in the district’s low-lying and riverine rural areas and of waterlogging in the urban areas.

“Because of heavy rainfall in the past 24 hours, the Brahmaputra is showing a rising trend at Dholla, the Kundil at Chapakhowa, the Buri Dihing at Margherita, the Doomdooma at Doomdooma and the Tirap at Moulang,” an official at the Doomdooma subdivisional water resource office said in the evening.

“The Noa-Dehing is near the danger level at Chmoni,” Sudip Hazarika, a farmer of Sumoni Gaon, said.

The Brahmaputra is also flowing above the danger level at Neematighat in Jorhat and in Dhubri, the Dhansiri at Numaligarh in Golaghat and the Jia Bharali at NT Road crossing in Sonitpur.

The Goalpara water resources department is facing a tough time repairing embankments, damaged in over 15 places, as the ground water pours in with every dig of the spade, said assistant executive engineer Asad Hussain. No death due to floods has been reported in the past 24 hours. So far, 86 people have died in the floods.