The Opposition Congress and the Anchalik Gana Morcha have attributed the delay to the intra-party power tussle, putting the BJP leadership in a dilemma 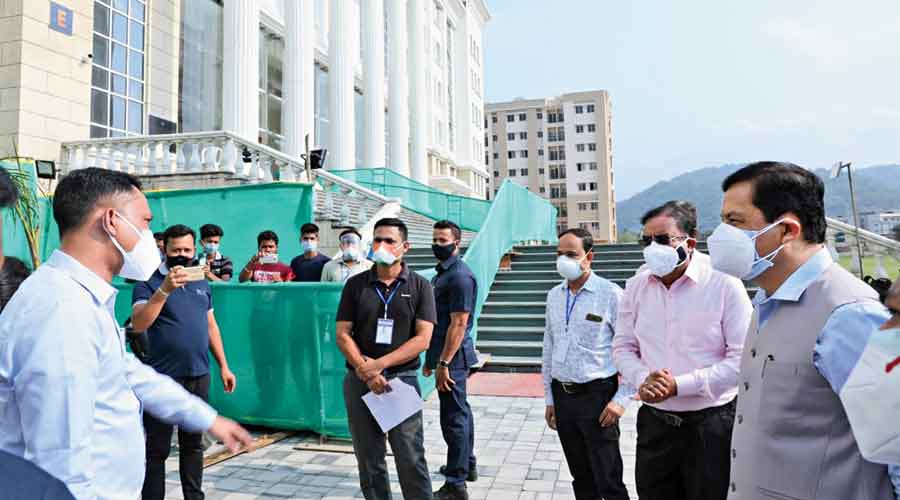 Assam chief minister Sarbananda Sonowal on Friday said that saving the people of the state from the pandemic was more important than thinking about who will be the next chief minister.

Sonowal made the comment in response to queries from journalists on formation of the next government and who will be the chief minister since there has been nothing official from the BJP leadership even though the Assembly election results were declared on Sunday, with the Opposition criticising the ruling BJP for the “glaring delay” during the pandemic.

Sonowal’s reaction, his first, came amid intense speculations over who will be the next chief minister after the BJP-led alliance won a decisive majority five days ago.

State BJP president Ranjeet Kumar Dass had said a few days ago that everybody knows that either Sonowal or senior cabinet minister Himanta Biswa Sarma will be the chief minister, adding to the speculations.

“Lots of reports are doing the rounds. In the next couple of days the parliamentary board will meet and take a final decision. You all should therefore not think much about it (who will be the chief minister). Rather we all should discharge our duty and save the people of Assam from the pandemic,” Sonowal said.

The term of the present Assembly ends on May 24, an official said.

The Opposition Congress and the Anchalik Gana Morcha have attributed the delay to the intra-party power tussle for the chief minister’s post putting the BJP leadership in a dilemma.

Bobbeeta Sharma, chairperson of the PCC media department, told The Telegraph that the BJP not being able declare its chief minister even after getting a decisive mandate from the people of Assam speaks volumes about the “internal squabble” over the issue.

“All is not well in the BJP given the glaring delay. It also exposes its lackadaisical attitude towards the people of Assam who are in the midst of a surging Covid-19 pandemic that needs clear direction from a leader who can lead from the front.

“The fate of Assam is hanging although we did not have a hung mandate. What the future may hold is also a big question. Are we going to

have a stable government if declaring a chief minister takes such a long time?” Sharma asked.

Even BJP insiders said the delay was “glaring” and “exposed” the power tussle as well as the leadership’s dilemma in choosing between Sonowal and Sarma even though most point towards the continuance of Sonowal who had on Thursday reviewed the Covid-19 situation with deputy commissioners.

Health minister Sarma too has been going around as usual toning up the infrastructure to treat Covid patients.

Till Thursday, there were 31,829 active cases in the state, most detected since April 4 when Assam had only 617 active cases.

Anchalik Gana Morcha’s Ajit Kumar Bhuyan, a Rajya Sabha MP from Assam, too flayed the ruling party, saying it was really a matter of shame if a disciplined party like the BJP is not able to take a call on the chief minister though the poll results were declared on Sunday.

The BJP-led alliance had won 75 seats while the Congress-led Opposition alliance bagged 50 with Raijor Dal winning a lone seat in the Assembly polls.