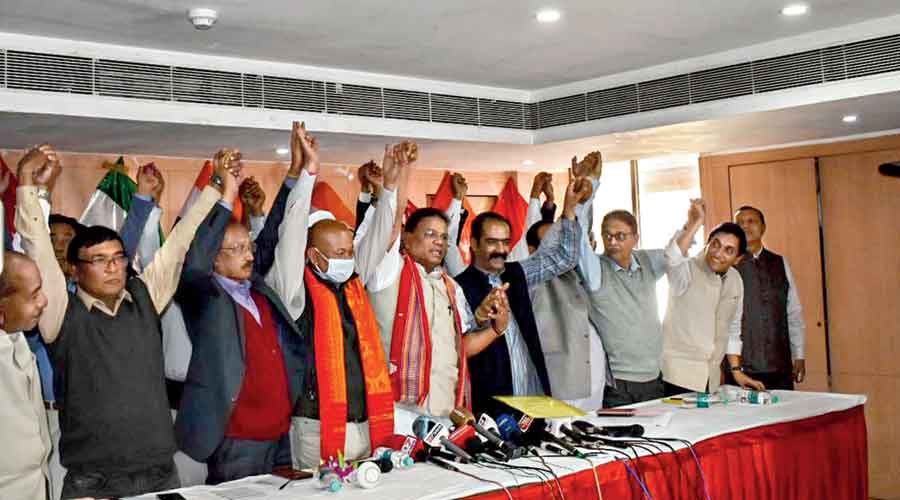 The Congress-led alliance’s show of solidarity after the BPF joined in Guwahati on Sunday
Telegraph picture
Umanand Jaiswal   |   Guwahati   |   Published 01.03.21, 12:41 AM

One of Assam’s senior ministers Pramila Rani Brahma vented her ire at the BJP on Sunday, a day after her party — the Bodoland People’s Front — had walked out of the ruling alliance stitched before the 2016 Assembly polls.

The BPF on Sunday afternoon formally joined the Congress-led grand alliance in Guwahati and exuded confidence of forming a non-BJP government with absolute majority.

“How could we stay with the BJP after what they did to us? They betrayed us... repeatedly insulted us... telling publicly they will not ally with us during and after the BTC polls. They will ally with the new party (UPPL). That is why we left. State BJP president Ranjeet Kumar Dass had publicly said the BPF has no shame because we have not left the government. But why should we leave? Our alliance is for five years,” Pramila, the 1951-born social welfare minister said trying to justify the end of their alliance with the BJP.

She went on to add: “We were in the government because we formed it together. It is also our right, not only of the BJP. They treated us like dogs, using us when required and then chasing us away. They did not allow us to function properly, disallowed us from implementing schemes. They will sink because of their arrogance. They will not recover. We have joined the Congress-led mahajot. We will contest 12 seats in the BTC and help the Congress-led alliance outside it.”

Although the BPF lost control of the BTC after 17 long years in December despite coming tantalisingly close to retaining power by winning 17 council seats, three short of majority, it still has the manpower (12 MLAs, of whom three are still ministers in the BJP-led government) and areas of influence that could  impact the BJP-UPPL poll prospects.

The BPF had ended its 13-year alliance with the Congress in June 2014 citing lack of development of the BTC under the Congress-led government.

One key reason was, however, the change of guard at the Centre — Narendra Modi-led NDA government replacing Manmohan Singh-led UPA regime.

The BPF or other smaller regional parties have invariably sided with the party at the Centre but this time the BPF has an “axe to grind” against the BJP for dumping it for UPPL despite its “very public attempts” to work together with the BJP to run the council, political watchers said.

The Congress-led alliance welcomed the development for it gave a huge boost to its campaign to oust the “divisive” BJP in the state polls to be held in three phases — March 27, April 1 and 6.

This was reflected in PC chief Ripun Bora’s reaction, “The Congress-led Mahajot has increased its strength to seven as our old friend, the Bodoland People’s Front, have joined us today. Assam’s destiny is about to change for the better. Many tributaries join together to make a strong river and the Congress-led Mahajot gets one more partner, the BPF. We are coming to power on May 2. We will settle all poll-related issues by March 5. We also take this opportunity to request the Election Commission to ensure free and fair polls.”

Besides the Congress and the BPF, the other constituents of the grand alliance included the Anchalik Gana Morcha,  AIUDF, CPI, CPI (M), and the CPI (ML).

BPF chief Hagrama Mohilary said they have formally joined the mahahjot because of the prevailing situation under the BJP. “If we have to save Assam, the constitutional rights of the various communities, we have to join the Congress-led Mahajot and jointly fight the polls. We have to oust BJP from Assam.  We are sure we will form the government. A new government is coming under the mahajot with absolute majority. I am very happy today,” Mohilary said.

The ruling BJP played down the developments, asserting that BPF quitting the alliance was a foregone conclusion, a reason why the BJP joined hands with the United People’s Party Liberal (UPPL) and campaigned aggressively against the BPF in the Bodoland Territorial Council polls in December 2020.

“BPF joining the Congress-led alliance has vindicated our stand of joining hands with the UPPL. We could see through the secret understanding BPF had with the Congress and the AIUDF evident from the mass transfer of Muslim votes to the BPF in the BTC polls. They have joined the alliance only because of power, it is against the wishes of the Bodo people,” BJP spokesperson Lakhya Konwar told The Telegraph.

He also dismissed senior minister Brahma’s allegations. “We have never humiliated anyone. Had we wanted to humiliate BPF we would have asked their ministers to resign from the council of ministers. They are still continuing. How can this be betrayal?” Konwar  asked.

Congress’ general secretary Priyanka Gandhi Vadra will be visiting the state for two days from Monday. She will be campaigning in Lakhimpur and Sonitpur districts to boost the party’s prospects.