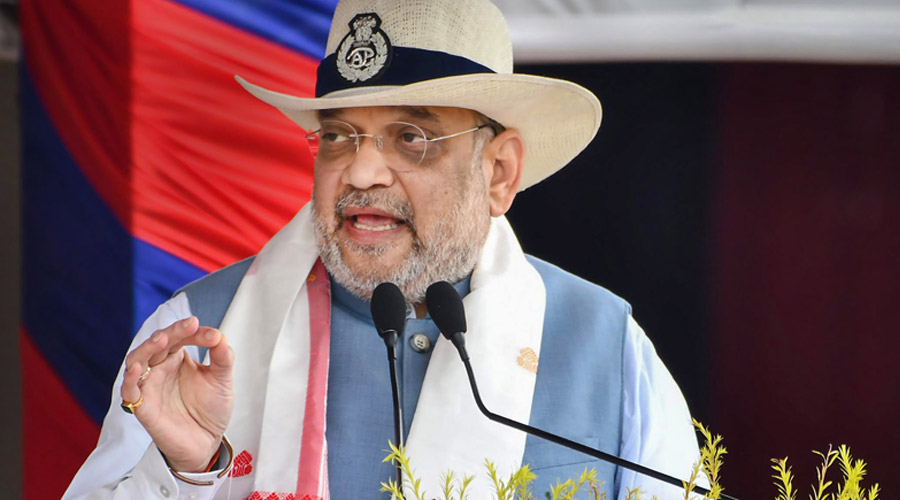 Union Home Minister Amit Shah addresses a special programme for the presentation of the President’s Colours to the Assam Police, in Guwahati on Tuesday
PTI Photo
Our Bureau, PTI   |   Guwahati   |   Published 10.05.22, 01:17 PM

Union Home Minister Amit Shah on Tuesday said improved law and order and peace accords with militant outfits led to the partial withdrawal of AFSPA in Assam, and that he was confident it will be revoked soon from the entire state.

Shah, after presenting the President's Colour to the Assam Police here, said in his address that due to the efforts of the Centre and Chief Minister Minister Himanta Biswa Sarma, most of the militant outfits have entered into peace agreements and the day is not far when the entire state will be completely free from insurgency and violence .

The Armed Forces Special Powers Act has been revoked from 23 districts, and partially from one district. I am confident that it will be completely withdrawn from the entire state soon, he said.

The home minister said those who have surrendered and returned to the mainstream are being rehabilitated by both the central and state governments.

The Assam Police has a glorious history and has successfully tackled insurgency, border issues, smuggling of arms, drugs and cattle, rhino poaching and social issues like witchcraft to emerge as one of the foremost police forces of the country, Shah said.

It rightly deserves to be honoured with the President's Colour, he added.

Earlier in the day, Shah, who is on a two-day visit to the northeastern state, awarded the Assam Police with the President's Colour in the presence of Chief Minister Himanta Biswa Sarma and Director General of Police Bhaskar Jyoti Mahanta at the 'Alankaran Parade' ceremony here.

The flag is engraved with Assam's map and 36 stars representing the districts of the state, a one-horned rhino and the insignia of Assam Police with its motto.

Assam is the 10th state in the country to receive the President's Colour, the highest honour given to any military or police unit in recognition of exceptional service rendered to the nation, both in peace and war.