Two killed in road accident on NH2 near Dhanbad

Car rams into static truck as the rear right tyre bursts, both driver and the owner dies on spot 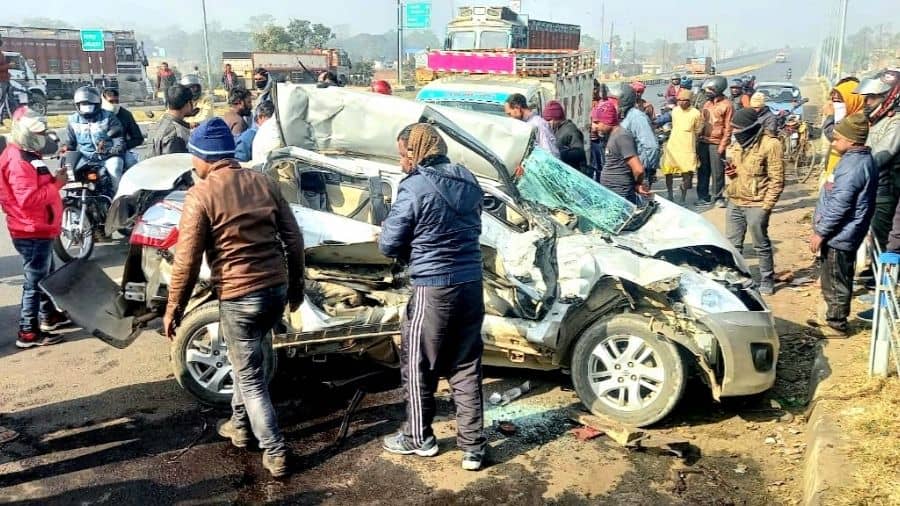 In a tragic accident on National Highway 2, two persons were killed when a car coming from Hazaribagh rammed into a static truck. The mishap took place near the Jodapipal area of Barwaddah police station of Dhanbad this morning at around 9 am when the driver of the car lost control caused by a tyre blast.

Local residents and passersby who rushed to the site after witnessing the accident informed Barwaddah police as a team led by Assistant Sub Inspector of police Bhogendra Paswan reached the site and extricated the dead body of the driver, Mahendra Kumar from the mangled remains of the car.

The body of the car owner, Giridhari Mahto, was recovered from outside the car as he fell out of the vehicle upon impact.

The police sent both the dead bodies for postmortem at Sahid Nirmal Mahto Medical College and Hospital (SNMMCH) and informed the family members over the phone.

Eyewitnesses said that the car was running at a high speed of over 100 kilometres per hour when the blast took place in the rear right tyre. The driver lost balance and rammed the vehicle into the static truck.

ASI, Bhogendra Paswan said, “We received information over the phone about the accident and reached the site to find the two persons lying dead. We informed the family members of the deceased over the phone and sent both the dead bodies for postmortem at SNMMCH."

In another accident that took place near  Bank More police station late last night, the SUV of Ragini Singh, wife of former Jharia MLA Sanjeev Singh, collided with a car owned by one Satyam Singh of Surya Vihar colony. The bodyguards of Ragini Singh allegedly manhandled the car owner and injured him.

A team of Bank More police station reached the brawl site and admitted Satyam Singh to a hospital where he was released after primary care.