Tribal activists expect Droupadi Murmu to be assertive as President

Former Jharkhand governor has to be more authoritative when faced with political pressure from ruling party: Lawyer Ratan Tirkey 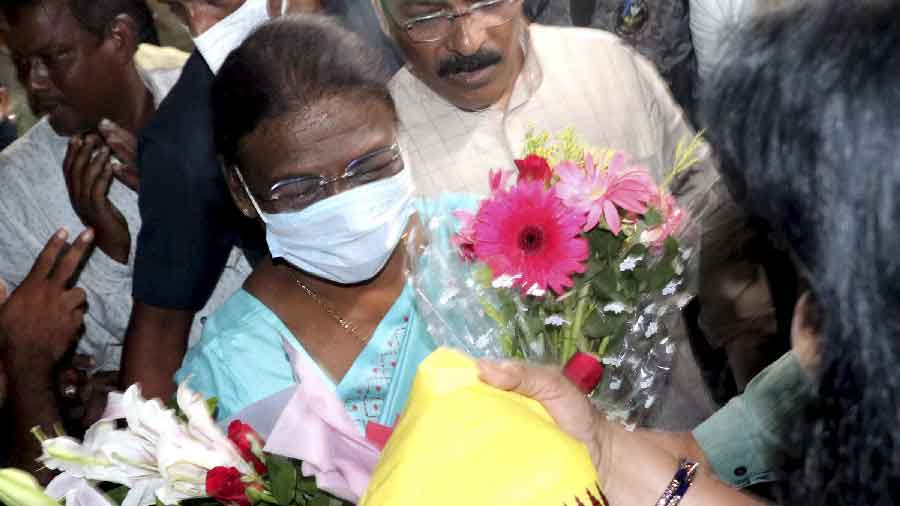 NDAs presidential candidate Draupadi Murmu being welcomed by BJP activists as she arrives at a guest house, in Bhubaneswar on Wednesday
PTI Picture
Animesh Bisoee   |   Jamshedpur   |   Published 23.06.22, 02:22 AM

Jharkhand’s tribal activists have welcomed Santhal politician Droupadi Murmu’s nomination as NDA candidate for President, announced on Tuesday, while hoping she would do more for tribal rights if elected than she had as the state’s governor between 2015 and 2021.

“We are happy that a tribal and Santhal woman is, going by the numbers, almost certain to become President. We nurture high hopes that vexed tribal issues like the Sarna dharma code for the population census would now get a hearing,” said Ratan Tirkey, a lawyer-activist who was part of the state government’s Tribal Advisory Council (TAC) during the BJP administration of Raghubar Das (2014-19).

Many tribal communities in Jharkhand — where tribes make up more than a fourth of the population — follow the Sarna religion and want it recognised in the questionnaire of the decadal national population census.

The Ranchi-based Tirkey, among the pioneering agitators for Jharkhand’ statehood, said: “However, going by her (Murmu’s) tenure as governor, she has to be more authoritative as President when faced with political pressure from the ruling party (BJP).”

The BJP was in power in Jharkhand for most of Murmu’s six-year stint as governor, and at the Centre through the whole of it.

Recalling his meetings in 2016 with Murmu, a former BJP politician, Tirkey said she had not done enough to ensure proper implementation of the self-governance rights granted to tribal communities under the Fifth Schedule and the Panchayats (Extension to Scheduled Areas) Act or Pesa.

“Despite several requests, the then governor never exercised her powers to implement the Fifth Schedule provisions and Pesa in letter and spirit,” Tirkey said.

He also recalled meeting the governor and expressing the strong tribal resentment at the then Das government’s attempt to amend two laws that safeguarded tribal communities’ rights on their land — the Chhotanagpur Tenancy Act and the Santhal Parganas Tenancy Act.

The amendments sought to give tribal people the right to let the government make commercial use of their land, and allowed the government to take their land on lease. The original laws allowed land transactions only between tribal and tribal.

“I was part of a TAC meeting from which several tribal leaders walked out. I met the governor, told her of the resentment and asked how she could, as (ex officio) head of the TAC, allow the idea of amending the acts,” Tirkey said.

“We were happy that she finally relented and returned the (amendment) bills to the then government.”

The bills had been sent to Murmu in November 2016 and she returned them on May 24, 2017, along with the 192 memorandums she had received against the amendments. The Das government withdrew the bills in August 2017.

Murmu, who is from Odisha’s Mayurbhanj district that adjoins Jharkhand’s East Singhbhum district, is also accused of taking a soft stand on police aggression against tribals during the Pathalgarhi movement against the planned tweaks to the tenancy acts.

The protests had turned violent with some participants taking a policeman and bodyguards of then BJP MP Karia Munda hostage. It triggered a police crackdown that led to the death of a tribal man and criminal cases against about 200 accused, including the now deceased tribal rights defender Father Stan Swamy.

“We had hoped she would raise her voice for the tribals before the government, but this did not happen,” woman tribal rights activist and an associate of Father Stan, Aloka Kujur, said.

“Instead, she called the Pathalgarhi agitation leaders and appealed to them to repose their faith in the Constitution.”

“We thank the BJP central leadership. This is the first time a tribal, that too a Santhal, is set to become President. The BJP has shown its real concern for tribal welfare,” Das, BJP national vice-president and former chief minister, said.

“I don’t want to comment on controversial issues of past years involving presidential nominee Droupadi Murmu. I can only say that the BJP central leadership has taken a historic decision,” he said.

The ruling JMM has been silent, caught in a bind on Murmu’s candidature since the party represents a tribal vote bank while being part of the national Opposition that has put up Yashwant Sinha as its presidential candidate.

The JMM seemed to be still weighing its options. The party’s central general secretary and spokesperson, Supriyo Bhattacharya, said “no comments” when asked for his reaction to Murmu’s nomination.