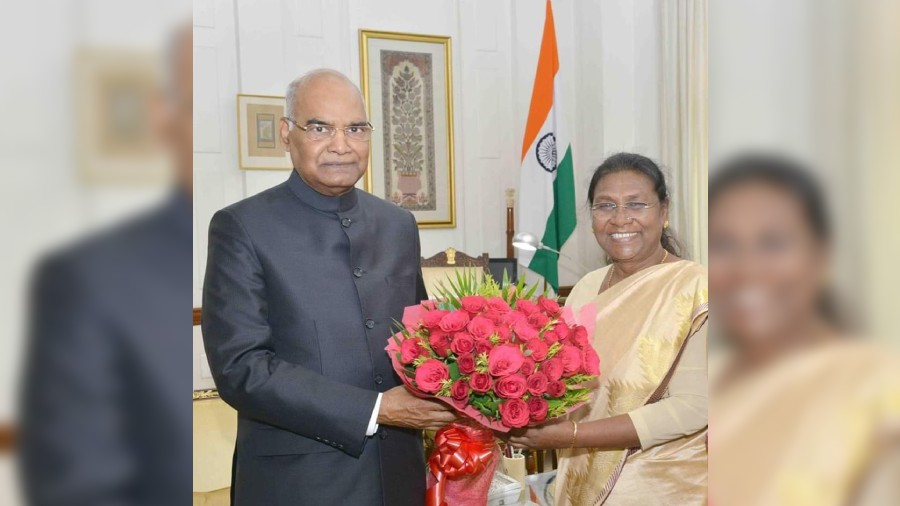 NDA candidate Droupadi Murmu on Wednesday appeared set for smooth sailing in the presidential election after she received the crucial backing of BJD, but an unfazed Opposition nominee Yashwant Sinha asserted that he is fighting an ideological contest and the country should not have a "rubber-stamp president".

With the support of Naveen Patnaik's party, Murmu, who belongs to the Santhal tribal community in Odisha, has around 52 percent votes (around 5,67,000 votes) out of a total of 10,86,431 votes of all electors.

BJD president and Odisha Chief Minister Naveen Patnaik, who is currently touring Italy, appealed to all members of the state Assembly to support Murmu, 64, in the July 18 election, describing her as the daughter of the state.

On Wednesday morning, Murmu, before heading for Delhi, sought divine blessings as she swept the floor of a Shiva temple in her home in a nondescript tribal-dominated Rairangpur town in Odisha's Mayurbhanj district at the crack of dawn. It has been a daily ritual for her since she returned in August 2021 after retiring as governor of Jharkhand.

Like other days, she offered prayers at the temple after a bath and whispered into the ears of Nandi, the bull 'vahana' of Lord Shiva, a common practice in the region.

The temple was cordoned off by CRPF commandos provided to her after the Centre accorded her Z-Plus security cover soon after she was named the NDA presidential nominee by BJP president J P Nadda on Tuesday night.

A threat perception security report generated by central security agencies formed the basis of the decision by the Ministry of Home Affairs, officials said.

Hundreds of people gathered to greet Murmu at her house and later when she left for a 285-km journey to Bhubaneswar by car amidst an air of festivity.

Congress Legislature Party leader Narasingha Mishra, however, said BJP has fielded Murmu in the presidential poll keeping an eye on BJD's votes in the electoral college.

We may not support her in the elections even though she is the befitting candidate, he said.

Murmu, who will be the first tribal President and the youngest to occupy the post when elected, is also likely to get the support of other regional parties, including the AIADMK and the YSRCP.

She is likely to file her nomination on June 24 and is expected to be accompanied by top NDA leaders, including Prime Minister Narendra Modi.

Sinha, who will file his nomination for the presidential polls on June 27, held his first campaign strategy meeting on Wednesday at the NCP office in Delhi.

Talking to reporters, Sinha, 84, said the presidential election is not an individual battle but a fight for the issues plaguing the country.

"I am thankful to all the political parties that have given me the opportunity in the presidential polls. This election is not an individual fight for me. There are issues that the country is facing on which the electoral college has to take a decision," the former Union minister, who parted ways with the BJP in 2018 and has been a vocal critic of the Modi government, said.

"We will be going to various places in the country to campaign.... We are formulating a strategy for that. I congratulate Droupadi Murmu, but this is not me against her -- this is an ideological contest. We should not have a rubber-stamp president in the country," he said.

Leaders like KK Sharma (Nationalist Congress Party), Jairam Ramesh (Congress) and Sudheendra Kulkarni were present at the meeting on Wednesday.

In a statement, Sinha said if elected, he shall conscientiously uphold, without fear or favour, the basic values and guiding ideals of the Constitution.

He further alleged that the ongoing attacks on the federal structure of the Constitution, whereby the Centre is "attempting to rob the state governments of their legitimate rights and powers", will be treated as totally unacceptable.

"I shall raise my voice for the common people -- kisans, workers, unemployed youth, women and all marginalised sections of the society," Sinha said.

Both the candidates are likely to travel extensively in the country to seek the support of lawmakers and political parties.

The BJP had sprung a surprise by picking former Jharkhand Governor Murmu to succeed President Ram Nath Kovind, a leader from the Dalit community, and appears to have succeeded in attracting fence-sitters.

According to the latest official figures, the BJP on its own has 393 MPs, excluding four nominated Rajya Sabha members who cannot vote, out of the current strength of 776 members from both Houses, giving it a clear majority.

The BJP's numerical advantage in Parliament, which has almost half of the votes in the electoral college which also comprises all elected MLAs, is further enhanced when the strength of its allies like Janata Dal (United), which has 21 MPs in total, Rashtriya Lok Janshakti Party, Apna

"Many thanks to the prime minister for choosing a tribal woman who has proven her mettle as a minister in Odisha and during her gubernatorial stint in Jharkhand," the chief minister said in a statement.

Kumar's JD(U) is the second-largest constituent of the BJP-led NDA.

The Bihar CM had supported outgoing President Ram Nath Kovind's election in 2017 despite then not being in the NDA, after his pitch for a second term for Pranab Mukherjee was ignored by the Congress-led UPA.

Sikkim Chief Minister Prem Singh Tamang backed Murmu, saying his party Sikkim Krantikari Morcha will unconditionally support her as an ally of the NDA with the belief that will become the first president from a tribal ethnic group.

BJP leader and Union minister Giriraj Singh also urged Congress president Sonia Gandhi to back Murmu, saying there cannot be a bigger example of empowerment of women and Scheduled Tribes than the Odisha leader holding the top constitutional post.

The nominations can be filed till June 29 and the result of the election will be out on July 21.

Murmu will also be the first person from Odisha to occupy the top constitutional post if she is elected.