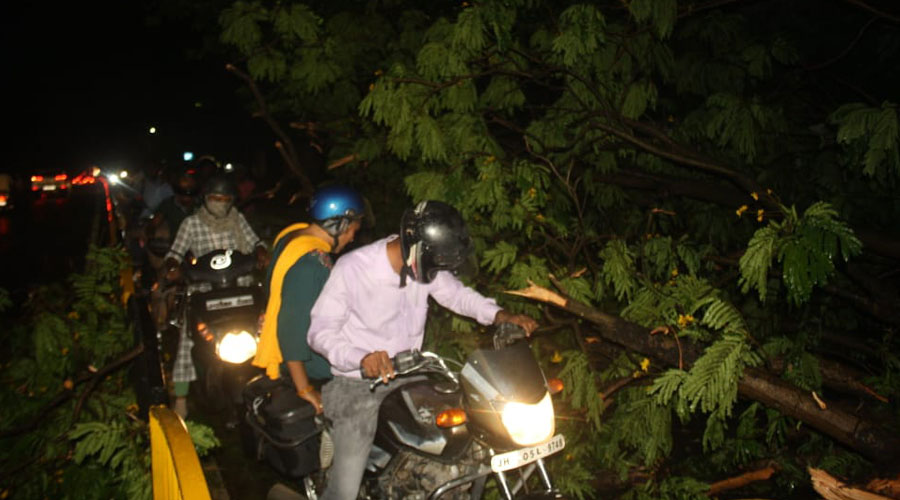 Branches of trees that fell at Sakchi in Jamshedpur due to the high intensity Nor'wester which hit several parts of the state on Sunday night.
Picture by Bhola Prasad
Pinaki Majumdar   |   Jamshedpur   |   Published 16.05.22, 12:14 PM

A high-intensity Nor'wester hit  Ranchi, Jamshedpur and several other parts of  Jharkhand on Sunday night with the thunderstorm uprooting trees and disrupting the power supply amid rain.

The Nor'wester, which originated from the Chhotanagpur plateau, travelled through various places before hitting three districts of the Kolhan region. It moved through Khunti, West Singhbhum and Seraikela-Kharsawan before reaching Jamshedpur, lasting for about an hour. The storm was accompanied by moderate showers and lightning.

Jamshedpur experienced a two-minute squall with winds at speeds of over 50 Kmph. The storm, accompanied by torrential rain, uprooted trees at several places on the stretch of NH- 33 between Jamshedpur and Chandil. Trees and branches fell at several places across the steel city disrupting traffic. The storm also damaged hoardings, electricity poles and power cables in several areas of the Kolhan region.

Several places serviced by Jharkhand Bijli Vitran Nigam Limited ( JBVNL ) including Mango, Sundernagar and Ghatshila witnessed blackouts. The regular power supply was yet to restore in those places.

Lightning claimed the life of a 45- year- old daily wager at Bistupur. He was identified as Dharamveer Kumar.

Rainwater entered several low-lying areas in and around Jamshedpur including the burn-care unit of state-owned MGM Medical College and Hospital.

Head of IMD's Ranchi Met Centre Abhishek Anand confirmed that the storm was a Nor'wester. He said it gained momentum due to a  north-south trough running from Bihar to south Tamil Nadu across north Chhattisgarh, Vidarbha, Telangana and Karnataka at 1.5 Km above mean sea level.

A weather analyst at the Patna Meteorological Centre said, 'Our observations indicated lightning and thundershowers in different areas of Jharkhand with varying wind speed on Sunday night.”

IMD said the southwest monsoon was likely to advance into the South Andaman Sea, Nicobar Islands and adjoining the southeast Bay of Bengal by Monday evening.