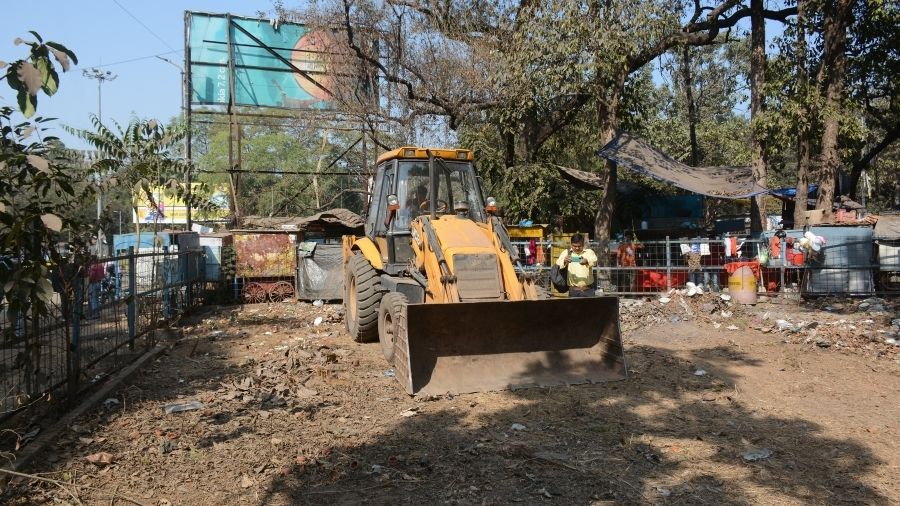 An earth-mover at work to remove encroachments from an area at Sakchi in Jamshedpur on Thursday to make way for an authorised vending zone.
Picture by Bhola Prasad
Pinaki Majumdar   |   Jamshdepur   |   Published 21.01.21, 05:44 PM

Civic authorities used a bulldozer to clear encroachments on Thursday from an area near the Sakchi gate of Jubilee park where a new vending zone is coming up.

He said the new area will be used to rehabilitate over 50 vendors who currently run their businesses from makeshift shops and push carts on both sides of the road that connects The Bengal Club with Jubilee Park.

JNAC city manager Ravi Bharti who was also present at the site said, "Apart from traffic congestion, vendors also used to litter the road. This made the place unhygienic. Daily garbage has to be cleaned by staff deployed by Jusco," he said.

According to the JNAC official, the vending zone will become fully operational within a week. There will be a parking zone where people can park vehicles and enjoy the delicacies and buy necessities.

“Bins will be placed for proper segregation of dry and wet waste,” said Bharti.

Notably, the civic body also has plans to set up a similar dedicated vending zone at Kadma and Sonari.