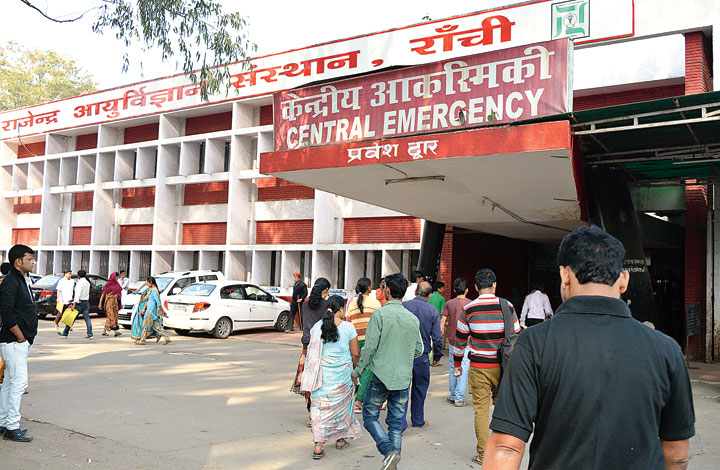 The sole state government-run superspecialty hospital, Rajendra Institute of Medical Sciences (RIMS) here, took a quantum jump in the field of heart surgery in Jharkhand on Friday with a relatively rare procedure.

The government hospital performed its first off-pump coronary artery bypass surgery on Friday on Ghanshyam Bhandri, 60, a resident of Jamtara in Santhal Pargana area of Jharkhand. The patient is stable.

An “off-pump CABG” is a CABG performed without the use of a heart-lung machine (cardiopulmonary bypass). This means the heart continues to provide blood to the rest of the body during the surgery. It is sometimes referred to as “beating heart surgery.”

RIMS Junior Doctors’ Association President Dr Ajit Kumar told The Telegraph on Saturday that the association felicitated the cardiac surgeons involved in the operation for “adding an extra feather to RIMS’ cap” in the field of cardiac surgery in Jharkhand.

“It was the first off-pump coronary artery bypass grafting or CABG as it is called. Very few centres do off-pump CABG. In the US, the majority of CABG surgeries are on-pump. The off-pump procedure saves money and heart-lung complications. Today (Saturday) we felicitated surgeons Dr Anshul Kumar and Dr Rakesh Prasad for their work,” Dr Kumar said.

Surgeon Dr Rakesh Prasad said the patient was recovering well. “He is a poor patient and this operation was done free of cost under the Pradhan Mantri Jan Arogya Yojana or Ayushman Bharat scheme. Earlier, such a patient would have had to go to Delhi for a CABG and the cost involved in this surgery would have ranged between Rs 3 and 4 lakh,” Dr Prasad told The Telegraph.

Cardiac surgery started at the cardio-thoracic vascular surgery department of RIMS from October 21, 2019. Since then, over three dozen cardiac surgeries have been performed here but not a surgery of such calibre that was done on Friday.

Dr Singh said the surgeons decided to attempt the off-pump CABG on the elderly Jamtara man when it was seen that calcium deposits on the main artery of his heart had left it completely blocked.

“It was a severe case of arterial plaque. The damaged artery was removed surgically and one vein from a leg was taken out and grafted. The CABG operation lasted for four hours. The patient was kept on ventilator support and later was shifted to the ICU,” Dr Singh said.

Dr Irfan Ansari, Jamtara MLA of the Congress, who is himself an alumnus of RIMS, expressed his excitement over the surgical achievement at his alma mater.

“I will personally meet the surgeons and congratulate them,” he said. “The start of such operation will benefit economically disadvantaged patients who are unable to go out of the state for better treatment,” Ansari said. “The new Hemant Soren government in the state will improve the health facilities here, especially for the poor.

A team of Medical Council of India (MCI) on Saturday inspected the radiology department of RIMS, Ranchi, to learn about the facilities available here for imparting education in the field of radiology.