Putting heart and sole into uplift 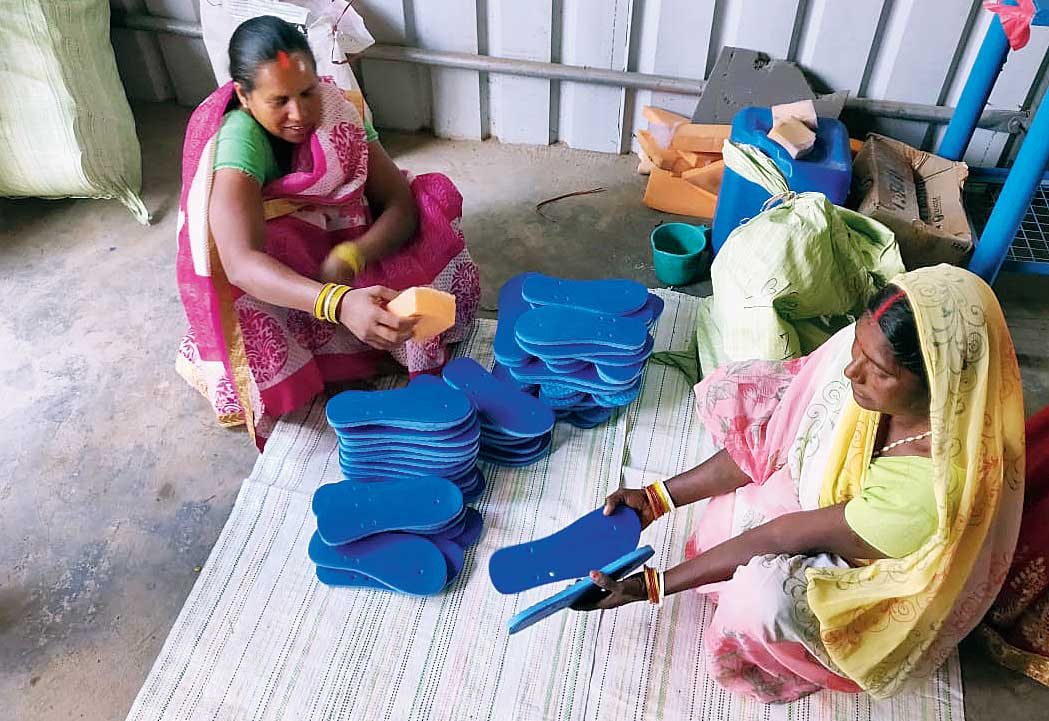 The sole of change is here in tribal village Soso of Nawagadh panchayat in Angara block, barely 40km from the capital.

Sunil Kumar Barnwal, principal secretary to chief minister Raghubar Das, was present during the launch of the training workshop on Sunday around 11am. Barnwal last year adopted Nawagadh panchayat — a population of around 5,500 spread across five villages and 22 tolas — to transform it as a model tribal panchayat of Jharkhand.

Soso on the banks of river Subernarekha, has a population of around 100 and is located about 45km from Ranchi district headquarters. Ranchi district administration has already promised necessary funds to this self-help group of women at Soso to assemble 5,000 pairs of chappals under the brand name Spice.

Dhawan who last year set up his footwear factory in Dhanbad in the wake of Momentum Jharkhand said he was optimistic about this initiative jointly with the Society and Ranchi administration.

“Thirty women of the (Soso) self-help group will be trained to make slippers. I have already done a survey how to link with the market this product, which will not only be cheap but also durable. It will certainly change their lives. I am in touch with wholesale dealers who are ready to buy the product,” Dhawan told this paper.

Ranchi apart, Dhawan said he had roped in women’s self-help groups in Dhanbad, Dumka, Chaibasa, Pakur, Sahebganj and Simdega for assembling hawai chappals. “I plan to train at least 300 women in each district. This will financially empower women. You empower a woman, you uplift her whole family,” he said.

The Calcutta entrepreneur added it was heartening that the Jharkhand state government had decided to involve self-help groups in shoe manufacturing to supply in schools. “In coming days, we will start training for shoe manufacture,” he said.

Nawagadh resident Saruf Khan said things changed in the past one year. “Earlier, agriculture was our mainstay. Or else, many worked as daily wagers. This was also true for women. But now, the CM’s principal secretary takes personal interest in this panchayat and regularly visits these villages under Nawagadh. Everyone is getting exposed to various opportunities. In fact, organic chemical-free farming is big here,” Khan said.

Khan added he was happy women were getting scope to get trained in trades. “They are making sanitary napkins under state rural livelihood programme, they will now learn to assemble slippers, their dreams are getting wings.”

Barnwal also inaugurated a micro irrigation project for Soso where water from Subernarekha would be pumped to irrigate 85 acres of farmland. He also met villagers to discuss how to further develop this panchayat.