Only 51% of Jharkhand's adult population have been double jabbed

A year on, state in 16th place nationally in terms of vaccine coverage 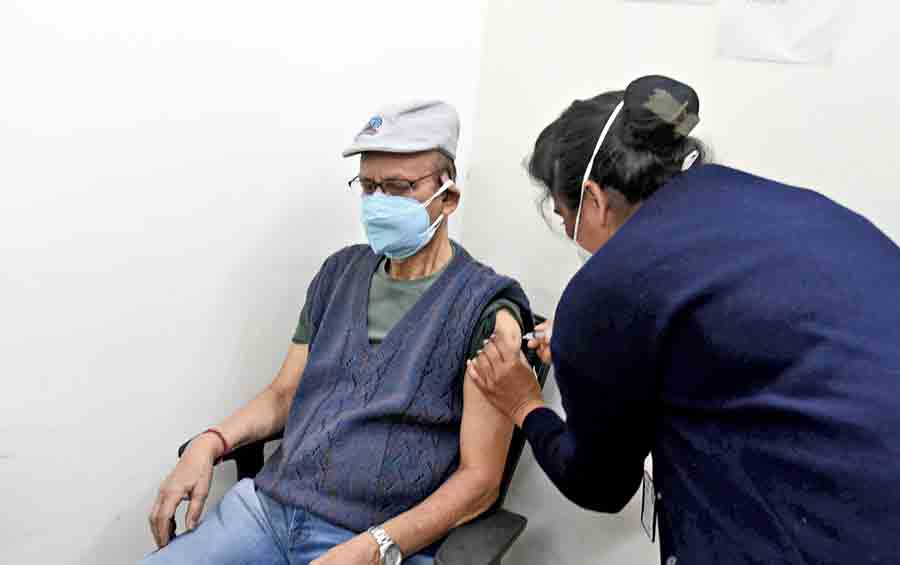 As per the latest update in the CoWIN portal's dashboard, Uttar Pradesh,  Maharashtra and West Bengal are among the top three states in terms of vaccine coverage,
File Picture
Our Correspondent   |   Ranchi   |   Published 17.01.22, 08:45 PM

Jharkhand has so far double jabbed 51 per of its adult population and is at 16th place nationally in terms of vaccine coverage ever since it joined the nationwide inoculation drive to combat the Covid-19 pandemic a year back.

As per the latest update in the CoWIN portal's dashboard, Uttar Pradesh,  Maharashtra and West Bengal are among the top three states in terms of vaccine coverage, while Union territories of Daman & Diu, Ladakh and Lakshwadeep are among those brining up the rear.

Even though the Jharkhand health department ran a special month-long  drive since December 16, 2021, setting a target of achieving 100 per cent coverage of all adults by January 15, 2022, it has not yielded the desired results at a time when the state is passing through another wave of infections.

On January 3 and January 10, Jharkhand launched two vaccination drives, one for 15-17 year-olds and the other for those who are eligible for a booster shot respectively. As per the figures, the state’s coverage of teenage vaccinations currently stands at 26 per cent of 23.98 lakh beneficiaries. For the  booster dose, the corresponding figure is barely 2 per cent of 6.50 lakh, the estimated population for those above 60 with comorbidities.

According to an official of the state chapter of National Health Mission (NHM), besides trying to ramp up coverage through various interventions, the key focus now was to speed up vaccination of those in the 15-17 age group. “While vaccination drives for all eligible beneficiaries are ongoing, the youth are more forthcoming and we are trying to cover them within the next three-four weeks on priority,” he said.

Dr Rakesh Dayal, nodal officer for the state vaccination drive, attributed the slow pace of second dose jabs to "several challenges", but did not specify. “A month back, our coverage of second dose vaccinations was about 35-36 per cent which has now touched 51 per cent. The month-long drive has certainly worked,” he claimed, but did not elaborate on why the set target of 100 per cent coverage could not be achieved.

A civil surgeon of a district which is in the red category said the migratory nature of the state's population was behind the poor second dose coverage. “In Jharkhand, since the start of the vaccination campaign last year, allocation of doses by the Centre was erratic for the first few months, which led to initial delays. This apart, most of the districts were given Covidshield, which has a gap of 12 weeks between two doses. In our district, as per the voters' list many had taken their first dose but had migrated or died," he said.