Of the 14 Assembly seats in Kolhan, 7 are with JMM, one each with Congress and Ajsu Party, and BJP has 5 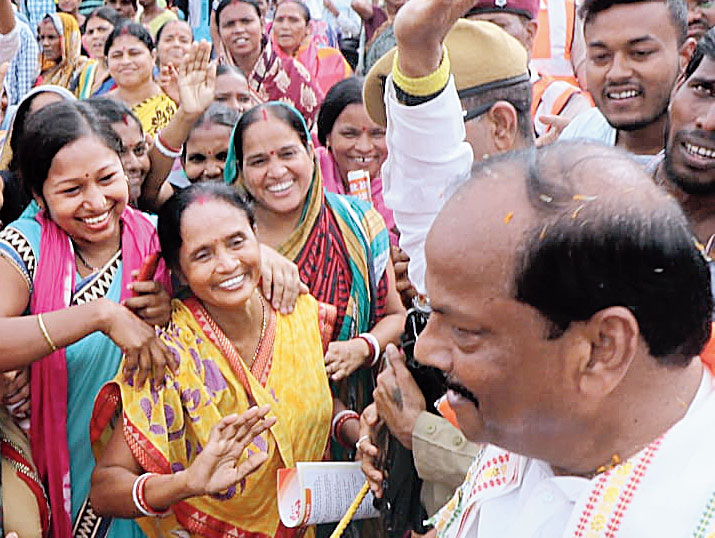 Chief minister Raghubar Das on Thursday kicked off the Kolhan leg of his campaign for the Assembly polls from Baharagora, a seat that had gone to the JMM in the 2014 state election, by targeting the first family of the JMM.

“The Sorens have become landlords usurping hundreds of acres of tribal land illegally. They have looted tribals and used them as vote banks. Our government has opened windows of development in Santhal Pargana in the last four and half years,” Das told a rally of over 3,000 people at the Middle School ground near Old Bus Stand at Baharagora, around 100km from here, in East Singhbhum district.

Of the 14 Assembly seats in Kolhan, seven are with the JMM, one each with Congress and Ajsu Party, and the BJP has five.

As achievements of his government Das fell back on another pet theme, the double-engine sarkar — BJP governments at the state as well as Centre. He reminded the gathering of the Centre’s Ujjwala Yojana to give poor women free cooking gas connections, the savings scheme for the girl child, financial aids for farmers under the CM Krishi Ashirwad Yojana.

“People of the state have benefited from our double-engine sarkar especially farmers who have got benefits of CM Krishi Ashirwad Yojana and PM Kisaan Samman Nidhi. You have blessed the Modi government the second time and with your blessings we will also realise your dreams the second time. So far, 40 lakh families have got LPG connections and 35 lakh farmers have got first instalments (of the state aid),” said Das.

The CM had begun his Johar Jan Ashirwad Yatra, meant to drum up support for the Assembly elections due this year, from Santhal Pargana earlier this month. The second leg will see him cover Kolhan.