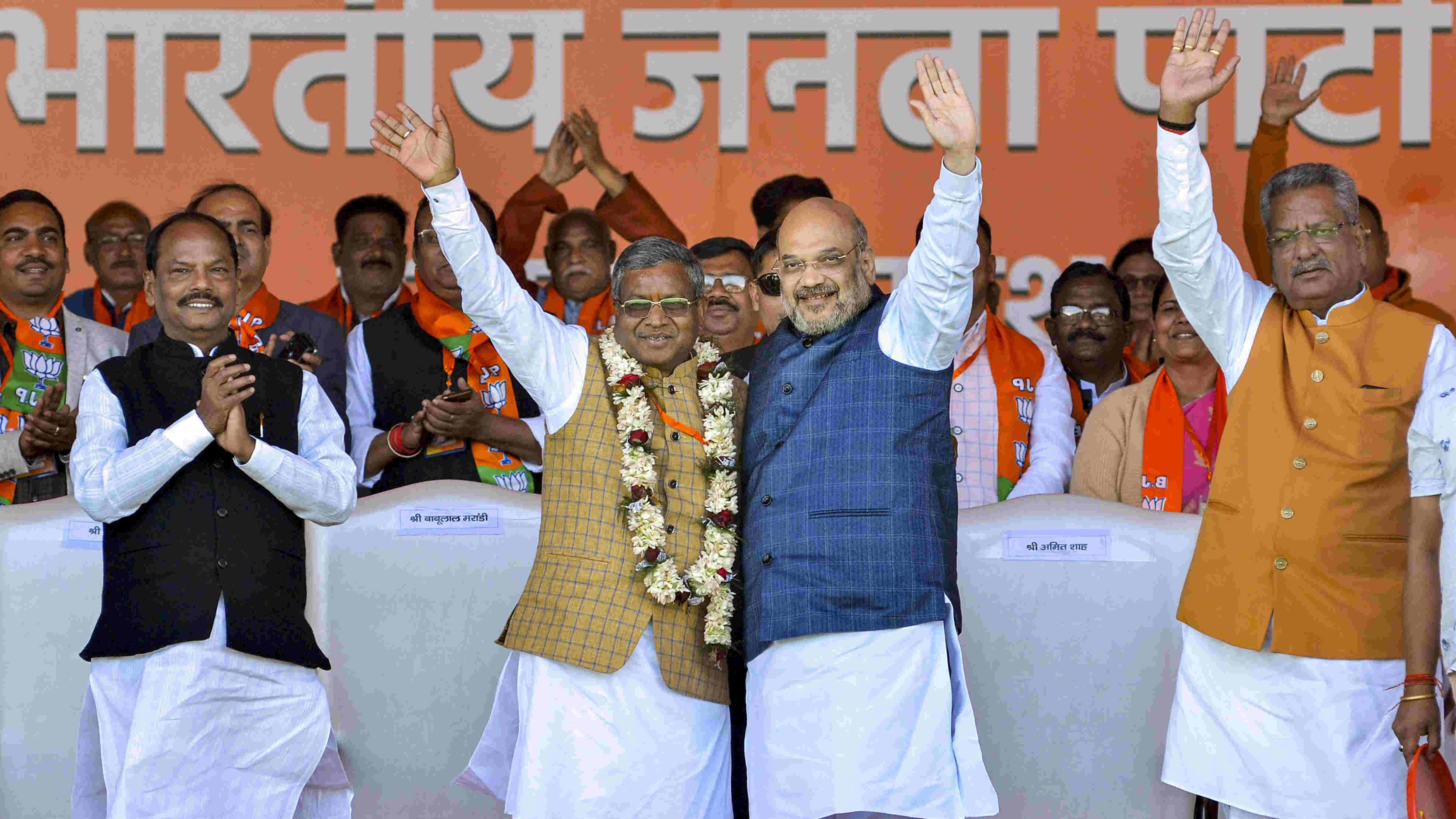 Babulal Marandi with senior BJP leader and Union home minister Amit Shah when he merged his JVM (P) with the BJP in February this year. On his right is former chief minister Raghubar Das.
PTI
Our Correspondent   |   Ranchi   |   Published 13.09.20, 07:56 PM

The BJP has criticized the Hemant Soren-led coalition government for trying to enact the Jharkhand Land Mutation Bill 2020, describing it as an attempt to provide immunity to revenue officials from legal consequences and making the state an easy hunting ground for land mafia.

Former chief minister Babulal Marandi, addressing mediapersons at the party headquarters here on Sunday, demanded the withdrawal of the bill and threatened a major agitation by against the bill, which according to him, would facilitate land-grabbing and encourage corruption.

“Section 22 of the bill clearly states that in case of any fraud in land mutation, revenue and land officials will be provided immunity from charges under civil as well as criminal laws,” said Marandi. “This law will provide protection to corrupt officials and land mafia, and be unfair on common public,” he added.

The Jharkhand Cabinet on September 8 okayed the Jharkhand Land Mutation Bill 2020, which is aimed at making “jamabandi” claims online and setting up of competent authorities for settlement of claims at district level. Jamabandi contains entries regarding ownership, cultivation and up-to-date data of various rights on the land. All changes of rights coming to the notice of the revenue agency are reflected in the jamabandi

Marandi said that wrongful mutation of gair majurwa land was done in different parts of Jharkhand, and many officials were working hand in glove with land mafia to forge land details and mutation. “I had addressed a letter to the chief minister highlighting the malpractices of land and revenue officials. Instead of bringing stringent rules for officials, the government decided to provide immunity to them from legal consequences,” he said.

The senior BJP leader demanded stringent rules for land and revenue officials and provision of imprisonment for officials found guilty of corruption.

Prior to the Cabinet decision, there was no act in the state defining mutation and settlement of land. The mutation bill 2020 has three provisions defining the mutation law in the state.

Marandi said that the ruling JMM, Congress and RJD government may try and pass the bill in the Monsoon session of the Assembly, and the BJP would ensure that the government doesn’t succeed.