Being a doctor and the director of a hospital I thought it is my job to also be the first to take the vaccine so that others can get motivated, says Dr Vijay Mishra 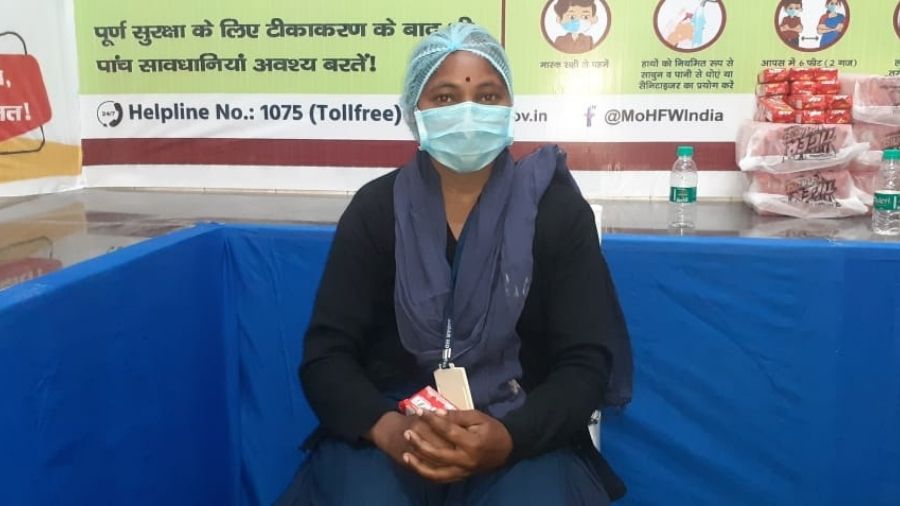 When Mariam Guriya, a cleanliness worker at Ranchi’s Sadar hospital, walked out of the vaccination centre about an hour after becoming the first recipient of Covishield in the state on Saturday, all she had to say was: “It felt like a small pinch in my arm. Nothing unusual.”

The 30-year-old frontline worker said she was proud to be among the first people to get the vaccine and appealed to others to not refrain from doing so.

“Since the outbreak of the virus, the pandemic threatened human existence, but now we can fight the deadly disease. I appeal to others to also take the vaccine as it is like any other normal vaccine dose,” she said.

Guriya said she remained in the observation room for half an hour but did not feel anything unusual. “I did not feel any sense of dizziness, nausea or any other abnormality at all. I am good to go on my day’s job,” she said flashing a victory sign.

At 11.30 am, an hour after Prime Minister Narendra Modi launched the vaccination programme in the country, chief minister Hemant Soren kicked off the state campaign from Sadar hospital and stayed in the vaccination room to oversee the administration of Covishield among the first few beneficiaries.

Dr Vijay Mishra, critical care head and director of Bhagwan Mahavir Medica Superspeciality Hospital, who was vaccinated after Mariam, said he chose to volunteer for the dose in the first phase to build confidence among others.

“Being a doctor and the director of a hospital I thought it is my job to also be the first to take the vaccine so that others can get motivated. I am here to allay fears about the vaccine among a few people. I felt totally safe,” he said.

The vaccination centre set up at the Sadar hospital wore a festive look with balloons put up all round. There was a sense of joy among beneficiaries and the health department staff ahead of the launch of vaccine. As the chief minister arrived at around 10.30am, tribal artists welcomed him by playing the mandar and traditional drums.

After launching the drive, Hemant said he hoped the vaccine turned out to be a boon for its people. “Today, we are at a decisive stage in our fight against the Covid-19 pandemic. In the last one year, the entire world has been through many phases of trauma, despair and hope. From here, we hope that we shall be able to overcome the virus,” he said, adding that even after taking the vaccine, people must continue with the prescribed precautionary steps to prevent any infection.

On Day One, the vaccination drive was rolled out at 48 centres across all 24 districts with a target of covering 4,800 people at the rate of 100 people per centre. A total of 1,62,000 Covishield doses have been allocated to Jharkhand in the first phase.

Hemant said that focus should be on the quality of administration rather than covering the maximum number of people at one go. “Yes, we are starting off with a small number of centres but we must remember that the key should be on safe vaccination. We will gradually increase centres to cover more people. If you recall, when Covid-19 broke in March last year, we didn’t have any testing centre. Today, facilities exist in every block and our testing ratio is among the top three states in the country. Similarly, we shall catch up with vaccination too,” he said.

State health secretary Nitin Kulkarni said all members his department and other stakeholders had to first work day and night to curb the spread of the virus, and later ran against time to prepare for the vaccination programme. “We held a series of workshops, training sessions and counselling sessions in the run-up to the vaccine drive. A couple of successful dry runs also helped build confidence,” he reporters.