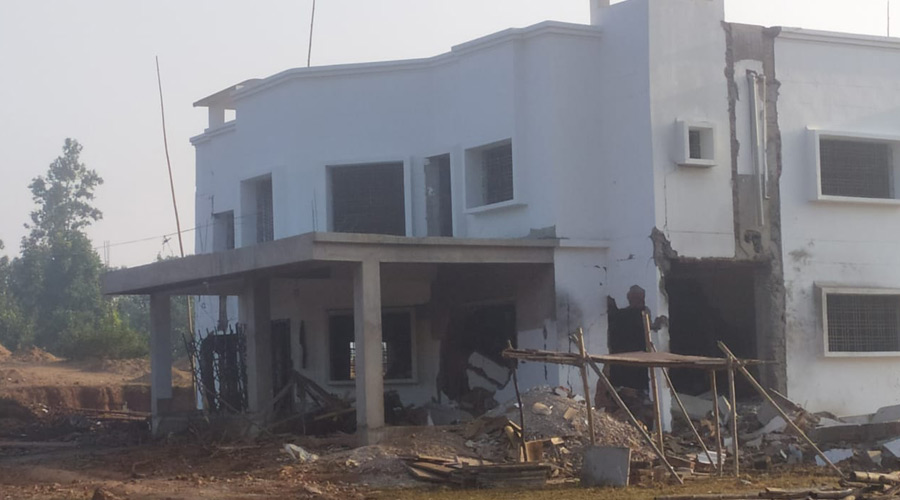 CPI (Maoist) rebels blew an under-construction police station in Kurumgarh in Chainpur block of Gumla, about 40km from the district headquarters, at I am on Friday soon after the three-day bandh concluded.

The banned extremist outfit had called the bandh from November 23 to 25 in Jharkhand, Chattisgarh and Odisha to protest against the arrest of top Maoist leader Prashant Bose alias Kishan Da, his wife and four others.

Jharkhand police were on high alert during all these three days, but the outlawed outfit triggered the explosion that damaged an upcoming Kurumgarh police station building located in the heavily rebel infested region only after the bandh period ended i.e Thursday midnight. Owing to security reasons, the district police dispatched teams to the blast site only on Friday morning, said police sources.

Gumla SP Dr Ehtesham Waquarib confirmed the incident. Talking over the phone, he said, “As per information, the blast occurred at around 1 am. There are no casualties, but the new police station building has been blown up. We are evaluating the situation and further probe is on.”

The incident has caused fear among local villagers. According to police sources, about 12 labourers were sleeping in the building when 70-80 naxals barged into the facility, took them out of the building at gunpoint and put gelatin sticks to trigger multiple blasts. “It’s a two-storied building and the first floor has been damaged through multiple blasts. The labourers were engaged in fitting the wall and floor tiles and civil works. No one is hurt,” said a local thana official, adding that the Kurumgarh police station is currently being run from a government school building and was to be shifted into the new one in the next few months.

Even on November 20’s day-long bandh, rebels engineered blasts on railway tracks in Latehar and West Singhbhum district affecting train services for several hours but no casualty was reported.

On November 12, Kishan Da, the senior-most leader in the central committee of the outlawed organisation with a bounty of Rs 1 crore on his head, was held with his wife Sheela Marandi in Saraikela, about 140 km from Ranchi when they were returning from Parasnath in Giridh. Kishan da, in his mid-seventies, has been active in Jharkhand, Bihar, West Bengal, Odisha and Andhra Pradesh. He was one of the think tanks of the CPI (Maoist) and involved in all major decision-making of the banned rebel outfit. His wife was also a wanted Maoist rebel and the only woman member of the CPI (Maoist) central committee, police had said.

Kishan da is suffering from age-related illnesses but still managed to coordinate all activities of the CPI (Maoist) in the eastern region. Most of the activities carried out in Jharkhand and some of the neighbouring states by the rebel outfit were orchestrated by Kishan Da. Following their arrest, police took them on remand for about a week and are currently lodged in Birsa Munda central prison in Ranchi.