Aged between 8 to 14 years, the children were brought from Purulia in Bengal 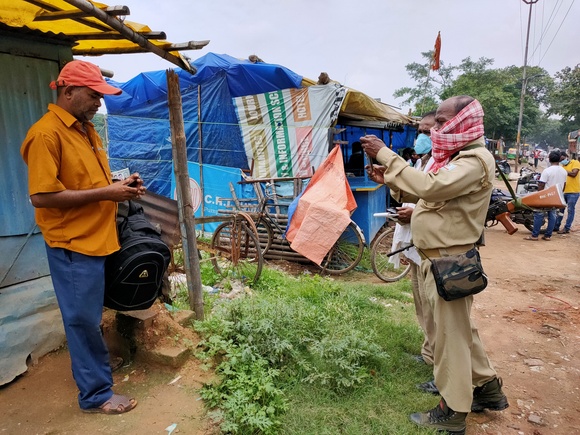 A policeman clicks a photo of the man who was arrested with eight children in Ranchi on Tuesday
Manob Chowdhury
Our Correspondent   |   Ranchi   |   Published 14.07.20, 07:17 PM

Ranchi police on Tuesday arrested a man who was accompanying eight young boys in what appeared to be a case of child trafficking.

The suspected trafficker as well as the children were from adjoining Purulia district of Bengal, representatives of the local Child Welfare Committee (CWC) that took care of the children said.

"All the eight children are boys aged between 8 and 14 years and were brought to Ranchi from Murguma near Jhalda in Purulia district,” CWC member Reeta Verma told The Telegraph Online.

The suspected trafficker, one Jahar Lal Dutta, was taken into police custody.

"It looks like a clear case of child trafficking," Verma said, adding the boys were brought to Ranchi to be engaged as child labour somewhere and were put up at the Kokar area.

Some local residents grew suspicious about their movements and informed Namkum police station that took prompt action, the CWC member said. While the suspected trafficker was taken into police custody, the boys were handed over to CWC, she said.

"I wonder how the boys were brought here after crossing an inter-state border when no train or bus service is available now," Verma exclaimed.

As per the protocol, the boys need to be tested for Covid-19 before keeping them with others at the designated home. So, their swab samples were collected for testing, she said, adding that the boys would be kept in isolation till their reports came in.

Ultimately, the boys would be kept at the designated home and they would be counselled.

"We will try to ascertain why and how they left their homes and also contact their families through the concerned police station in Purulia," she said.

Asked how they would ensure the boys got back to their homes, she said: "It takes time but then we also have to be sure before sending them to their respective homes after following legal procedures."