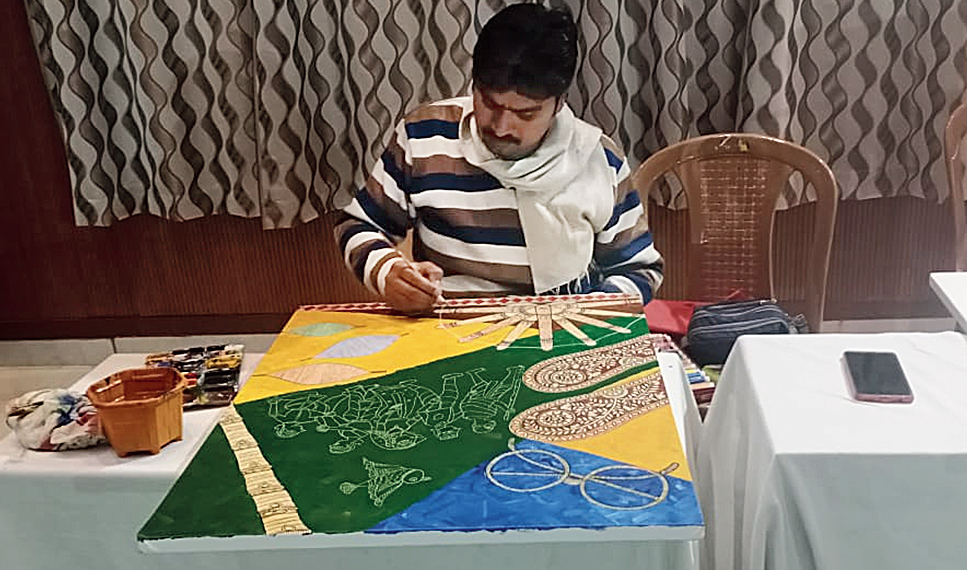 That’s perhaps why Rang, the four-day national art camp-cum-exhibition organised by Delhi Public School, Bokaro, in association with ONGC, Dhanbad-based society for the arts India Telling founded by Kashyap, and The Telegraph as media partner, is celebrating Bapu on canvas.

On the third day of the event, organised on DPS-Bokaro campus as a part of the 150th birth anniversary celebration of Mahatma Gandhi, Kashyap, who is also the curator of the art camp said they encouraged 50 participating students of DPS-Bokaro and other schools of Bokaro to make paintings based on what they knew about Bapu.

“We discovered that the children knew a lot. They knew about Gandhi’s messages of non-violence, peace and harmony, his simple lifestyle and his charkha (spinning wheel), that symbolises self-reliance, his spectacles and walking stick that became the iconic representations of the marches he undertook for India’s freedom,” Kashyap said.

He said the over 150 paintings made by 50 participating students, as well as the 11 painters from the across country in the first three days of the camp would be displayed on the concluding day on Thursday. “The 11 participating artists were Ramanuj Shekhar, Ravindra Kumar Das, Banita Bandopadhyay, Sunil Kumar, Hemlata, Lalit Kumar Sharma, Dipankar Karmakar, Anjali Prakash, Rajesh Ranjan, Anil Kumar Gope and Kamini Kanta Swain,” he said.

Delhi-based Das said he loved the camp. “I was amazed to see the awareness of kids,” he said. “I made a painting based on Bapu’s message of universal brotherhood.”

Madhubani painter from Bihar, Sharma said that Gandhi’s spinning the wheels of the charkha in jail fascinated him. “I made a painting based on that,” he said, adding that it became a fusion of Madhubani and contemporary styles.

Khushi Kumari, a Class IX student of DPS-Bokaro, said she learnt a lot about painting and Gandhi at the camp.