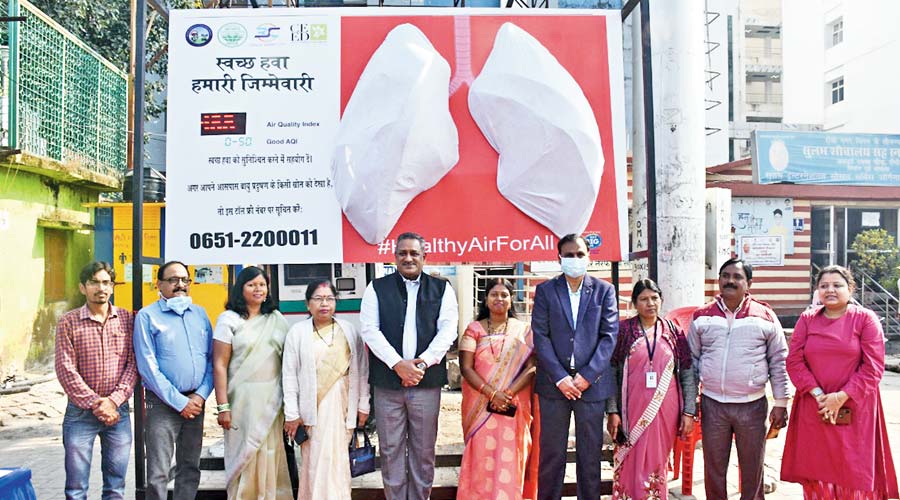 Officials in front of the lung billboard display unit at the Albert Ekka Chowk in Ranchi on Wednesday.
Picture by Manob Chowdhury
Animesh Bisoee   |   Jamshedpur   |   Published 25.11.21, 01:51 AM

The lung billboard display, which was inaugurated at Albert Ekka Chowk in Ranchi on Wednesday, indicated that the air quality index (AQI) in the Jharkhand capital was unhealthy as per US standard.

This billboard — installed by the Centre for Environment and Energy Development (CEED) with the support of the Ranchi Municipal Corporation, Ranchi Smart City Corporation Limited and the Jharkhand State Pollution Control Board (JSPCB) — displayed a score of 172 at noon.

“The AQI score of 172 is unhealthy as per US standards though it is moderate as per Central Pollution Control Board norm,” said senior programme manager of CEED Ankita Jyoti.

She said the State Urban Development Authority (Suda), a unit of the state urban development department, has already approved the installation of such lung display units in other major cities such as Jamshedpur and Dhanbad for awareness among masses about air pollution hazards and to know the exact extent of pollution.

“Based on their suggestions, we will be advising the local civic bodies to undertake measures to curb air pollution in these cities. We hope to have the suggestion by early next year,” said Das.

The artificial billboard is designed in in the shape of human lungs retrofitted with Hepa filters and a fan that mimics breathing to visually demonstrate the impact of air pollution.

The giant billboard is also fitted with a digital air quality monitor that will record and display the real-time AQI. During installation, the colour of the lungs is kept white (symbolising healthy lungs), which over a period of a few days will change to grey, brown and black signifying the level of poor air quality.

The billboard campaign will continue for a few days as the main objective is to solicit conscious efforts from citizens and organisations to curb air pollution in the city.

“The state government has already prioritised the reduction of air pollution as an important public issue. For mitigating the health risks, the board regularly issues health advisory and publicises air quality related data to make people aware.

“The lung’s billboard campaign will help create awareness among the people and prove to be an important step in garnering public participation to achieve the goal of clean air,” Das added.

Jyoti Kumar Singh, assistant municipal commissioner of Ranchi, said: “We are committed to ensuring clean air in the city and taking a pro-active approach in adopting innovative cleaner solutions to minimise the pollution load.”