Sanjay Kachyap has used his own experience to provide the benefits of libraries to poor students in rural hinterlands, mostly in rebel-hit areas 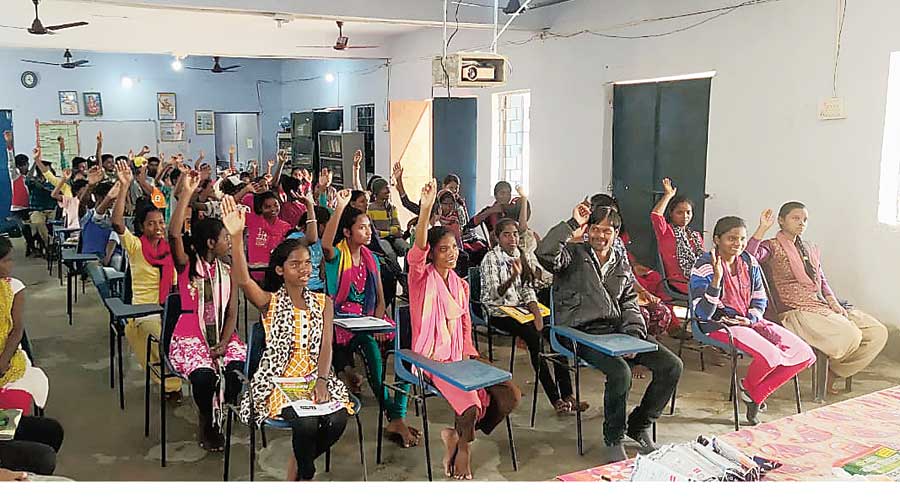 Rural students at an interactive session at a digital library set up in an unused government school classroom at Kharsawan in Jharkhand
Bhola Prasad
Animesh Bisoee   |   Jamshedpur   |   Published 16.08.21, 02:18 AM

A tribal official in the agriculture department in Jharkhand has earned the moniker of Kolhan’s “library man” for establishing as many as 25 libraries, including 12 digital libraries, in over a decade to help underprivileged students pursue their dream of higher education.

Sanjay Kachyap, a 40-year-old market secretary of the Agriculture Produce Market Committee (APMC) in Parsudih (Jamshedpur), has used his own experience of struggles in pursuing higher education to provide the benefits of libraries to poor students in rural hinterlands, mostly in rebel-hit areas.

“I had to forgo my ambition of joining the civil services (after two attempts) due to paucity of funds back in 2002. Completing graduation (honours in history from Tata College in Chaibasa) was itself a struggle. I somehow got through the railway recruitment board exam for train guard in 2004. But I could not devote much time to my inner calling to do something for poor students while on duty. I left the job in 2008 after succeeding in the Jharkhand Public Service Commission examination for market secretary in the agriculture department and started preparing a blueprint for my philanthropic activities,” said Kachyap, who hails from remote Pulhatu village in Chaibasa in West Singhbhum. His parents were manual workers.

He set up the first digital library at a community hall in his native village and in over a decade he has set up digital libraries in extremism-affected areas like Manoharpur, Kharsawan, Gudabandha, Dumaria and Mosaboni.

“I want poor but meritorious students do not face the same problems which I faced while pursuing their dream of higher education and getting through competitive examinations. So far through crowd-funding we have managed to install computers and LCD projectors in 12 libraries. Books have been stocked in all the 25 libraries established so far. The books pertain to school and college syllabuses and for competitive examinations like banks, railway, Staff Selection Commission and the UPSC,” Kachyap added.

He has been contributing half of his salary to this cause since 2008 while the rest is generated through support from sympathisers to his cause.

The passion for providing books to remote areas in the Kolhan region has made Kachyap convert his five-year-old hatchback into a mobile library. “I decided to convert my car into a library on wheels on December 8 which marked the death anniversary of tribal scholar Kartik Oraon. The car will be stocked with old and new books. I will drive it on my off days and Sundays to remote villages to create awareness about reading books and education amongst children,” said Kachyap.

The Digital Library Kolhan Group does not spend much on infrastructure though. “We use the community halls, abandoned schools (closed after merger of schools during the previous BJP government in Jharkhand) and even rooms in private houses of sympathetic villagers for our library,” said Kachyap.