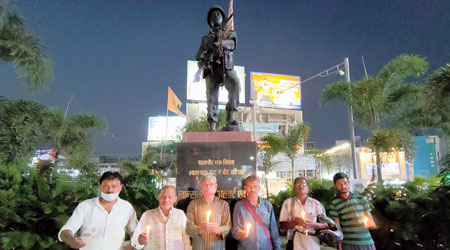 Tribal rights leaders and the Left parties leaders near the Albert Ekka Chowk in Ranchi on Tuesday to pay homage to martyred soldiers in J&K and the farmers killed in Lakhimpur Kheri.
Manob Chowdhury
Animesh Bisoee   |   Jamshedpur   |   Published 13.10.21, 12:03 AM

Farmers backed by the Left parties held candlelight marches in Jharkhand and lit candles at their homes in memory of the martyred soldiers and the farmers killed in recent violence.

“It was an impromptu decision taken by farmers associated with the All India Kisan Sabha (farmer’s outfit of the CPI) and we agreed to join hands in it. In all the 24 districts of Jharkhand, farmers along with the Left parties staged candle light marches in memory of the farmers killed on October 3 and the soldiers martyred on Monday,” said  Sufal Mahato, state coordinator of Jharkhand Rajya Kisan Sangarsh Samanway Samity (an outfit spearheading  the farmers’ agitation in the state since November 2020).

Five army soldiers were killed in an encounter that broke out in the forest area of Poonch sector in Jammu and Kashmir on Monday.

Four farmers were mowed down by a convoy led by an SUV owned by Union minister of state for home, Ajay Mishra Teni, in Lakhimpur Kheri on October 3 when they were returning from a protest. The minister’s son Ashish Mishra was allegedly in the SUV.

“Through the candlelight march we want to pay our homage to the martyred soldiers and also to the farmers who have died during the course of the protest against the new farm laws. We want to raise again the slogan of yesteryears ‘Jai Jawan, Jai Kisan’,” said Bhagwan Singh, a Sikh leader from Jamshedpur and a representative of the Mango Gurudwara Committee.

The farmers outfit also threatened to burn effigies of Prime Minister Narendra Modi and Union home minister Amit Shah on October 15 if the Union minister of state for home Ajay Mishra is not sacked by then.

“As long as the Union minister of state for home is in office we do not feel that the police, which functions under the home ministry, will do a fair probe into the killing of farmers. If the Prime Minister and the home minister do not sack Mishra, then we will burn both their effigies on October 15. We will also stage a rail roko (stopping rail) agitation on October 18 in support of our demand for repeal of three new farm laws,” said Sufal Mahato.

The three laws — The Farmers’ Produce Trade and Commerce (Promotion and Facilitation) Act, 2020, The Farmers (Empowerment and Protection) Agreement of Price Assurance and Farm Services Act, 2020, and The Essential Commodities (Amendment) Act 2020 — were passed by Parliament in September last year.

The farmers across the country have been seeking

the repeal of the three agriculture laws. The protesting farmers along Delhi borders have expressed the apprehension that these laws would pave the way for the dismantling of the minimum support price system, leaving them at the “mercy” of big corporations.

The government, however, has rejected these claims stating that the laws will only give farmers more options to sell their produce.