Ram Pravesh Singh, 47, was gunned down near his residence by two bike-borne criminals 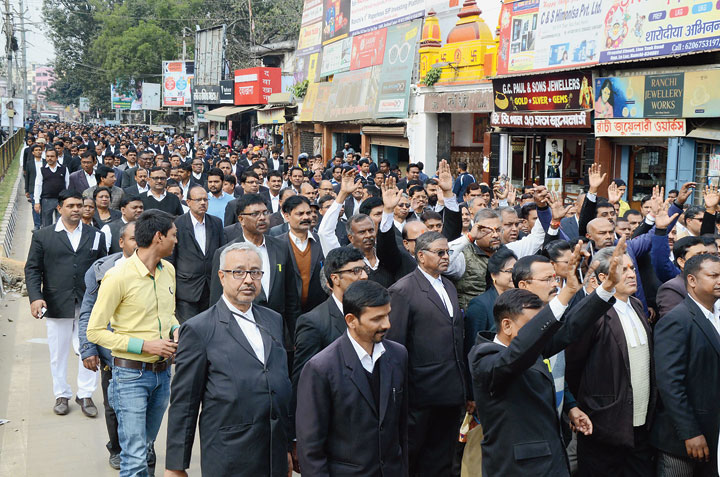 Lawyers take part in a silent march towards Albert Ekka Chowk in Ranchi on Tuesday to protest the murder of their colleague on Monday night.
Picture by Manob Chowdhary
Raj Kumar   |   Ranchi   |   Published 10.12.19, 07:29 PM

A lawyer was shot dead on Monday night in the city, prompting more than 900 advocates of the civil court to abstain from work on Tuesday and take out a silent march in protest against the deteriorating law and order situation in the state capital.

From Ranchi District Bar Association Building to Albert Ekka Chowk via Kutchery Chowk, Ranchi University and Shaheed Chowk, advocates walked silently to condemn the way their colleague Ram Pravesh Singh, 47, was gunned down near his residence at Road 5 of Sarvodaya Nagar, Kanke, by two bike-borne criminals.

Reaching Albert Ekka Chowk, advocates lit candles and observed a two-minute silence in honour of Singh, who hailed from Aurangabad in Bihar.

General secretary of Ranchi District Bar Association Kundan Prakashan told The Telegraph that it was a matter of deep concern that criminal elements had become so daring in the capital.

“They can gun down a lawyer in the state capital during election time, near his home, they are so daring,” Prakashan said. “This anarchy has created fear among the legal fraternity. Lawyers are soft targets whether they win or lose a case. If his client loses, he becomes the lawyer’s enemy. If his client wins, the opponent who has lost becomes the lawyer’s enemy. It’s a no-win situation. That’s why security is of paramount importance.”

Ranchi SSP Anish Gupta did not respond to The Telegraph on his cellphone and WhatsApp on Tuesday afternoon. But, Ranchi rural SP Rishav Kumar Jha said efforts were on to nab the culprits. “Some of the suspects have been detained for questioning. None has been arrested,” rural SP Jha said without sharing details.

Prodded for the line that the case has taken, a police officer said: “Primary investigation suggests land dispute was reason behind the murder. Advocate Singh had a dispute with Chotu Lakra over an 81-decimal plot in Misir Gonda. On October 23 this year, Singh filed a case with Gonda police too. We have detained Lakra and his brother-in-law Ramesh Gari, and are trying to ensure that whether our assumption (that they are linked to the crime) is correct or not.”

The CCTV footage showing the advocate’s murder is doing the rounds on social media. A man with his face covered comes closer to the advocate and fires once with a small gun on his victim’s left eye. The advocate slumps near his car.

None of the deceased’s family members could be contacted on Tuesday as they left for Aurangabad, Bihar, for Singh’s last rites. Advocates close to Singh said he is survived by his wife, two sons and a daughter.