Local automobile show operator offers support under Corporate Social Responsibility, promises to help with other equipments in the future 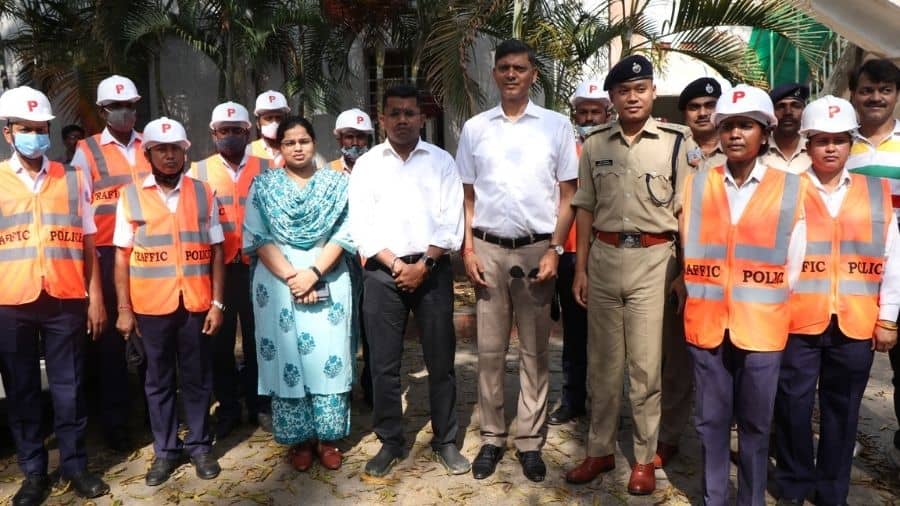 In a bid to ease the pain of Traffic policemen working relentlessly in extreme weather conditions to ensure the observance of traffic rules and smooth flow of vehicles on the road, Kia Motors, a local automobile show operator, provided the police force with 200 pieces of traffic helmets and 70 pieces of Fluorescent jackets as part of Corporate Social Responsibility initiative.

The pieces of equipment were distributed today during a function held at the office of senior superintendent of police Sanjeev Kumar in presence of senior police officers including R Ramkumar, City SP Reshma Rameshan, Rural SPL MK Pandey, Govindpur DSP, and others besides the dealer of Kia Motors, Deepak Sanwaria.

“We have distributed the gadgets among the traffic policemen today and will try to aid them with goggles, hand gloves, and umbrellas in the future in view of the gradual rise in temperature during summer,” Kumar said.

“We take the opportunity to appeal to common people in general and especially youth to abide by all traffic rules and particularly avoid helmetless bike rides,” said Kumar and said that the round the clock vehicle checking is being carried out by the police in view of upcoming Holi festival during which several cases of drunken driving is reported.

“We have constituted special teams for carrying special surveillance of traffic rules during the festive season as heavy penalties are being realized and stringent prosecution is also being ensured against the traffic rule violators,” said Kumar.