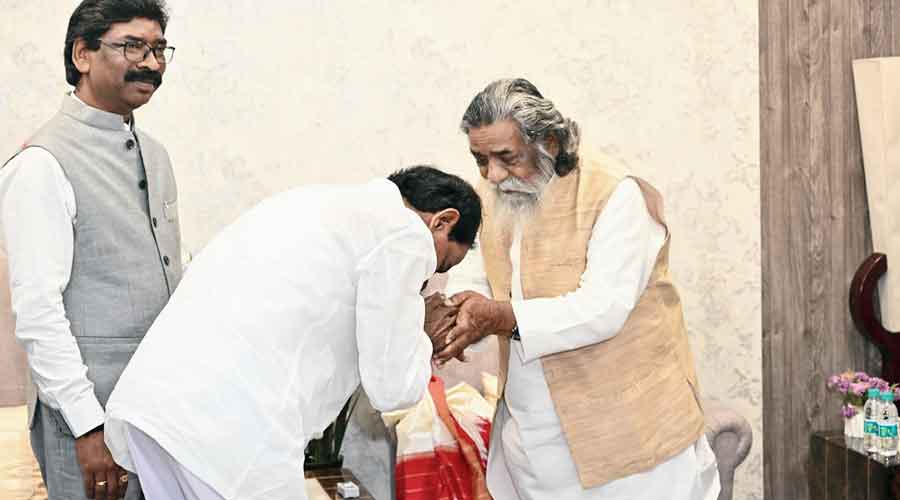 In a brief interaction with the media in Ranchi, Rao confirmed that political discussion did take place but tried to downplay it.

“The fight to get Telangana began in 2001 and Guruji (Shibu Soren) had extended his support to our cause and even offered his advice and participated in our agitation. I had a desire to take his blessing and also to fulfil my promise of financial assistance of Rs 10 lakh to the families of soldiers killed in the Galwan Valley clashes. Political discussions also took place. Discussions are taking place across the country,” said Rao.

Rao handed over a cheque of Rs 10 lakh to deceased Kundan Kumar’s wife Namrata Ojha and deceased soldier Ganesh Hansda’s mother Kapra Hansda. Rao had earlier extended support to Colonel Santosh Babu, belonging to Telangana, who was martyred in the clashes. He had announced extending similar help to all the 19 army personnel killed in the clash.

When prodded by reporters on how successful his effort to form the third front was, the Telangana chief minister refused to spell out the details.

“Please do not be in a haste and call it a third or fourth front. It is not about the anti-BJP or anti-Congress front. We know that since 75 years of Independence, the country has not developed as it should have been unlike other countries and it is the duty of every Indian and you (media) to discuss and make efforts for new ideology and new agenda so as to provide new direction to the country. We are also making an effort in the same direction. When the time comes we will spell out everything on a public forum,” he said.

Rao admitted that the current government is also not running properly.

Earlier, Rao had met leaders of many regional parties, including Bengal chief minister Mamata Banerjee, Maharashtra chief minister Uddhav Thackeray, NCP leader Sharad Pawar and Delhi chief minister Arvind Kejriwal regarding the formation of an alternative front to take on the BJP without Congress ahead of the 2024 general election.