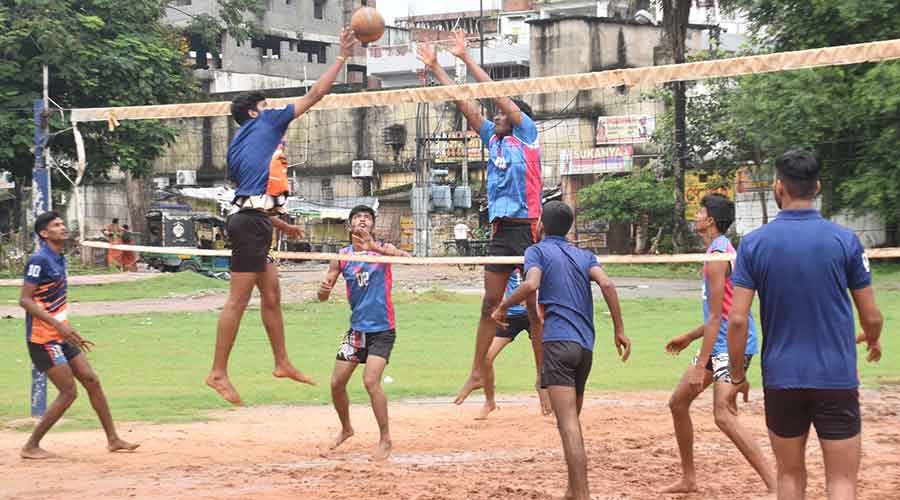 A Volleyball match in progress in between Dhanbad Red team and Dhanbad Blue team at Volleyball Ground, Jharnapara in Dhanbad on Sunday.
Gautam Dey
Our Bureau   |   Published 30.08.21, 01:21 AM

Dhanbad: The Dhanbad District Olympic Association on Sunday celebrated National Sports day by organising two different exhibition matches including a rugby match at Jila School Ground and a volleyball match at Jharapara Volleyball stadium Hirapur. The rugby match titled, Rugby 7 held between Dhanbad and Gomoh team of seven members each coordinated by District Rugby Association witnessed a close encounter between the two teams in which Gomoh team took the team during the first half itself and defeated Dhanbad by a score of 1-0. (Praduman Choubey)

A police team with the recovered arms in Chatra on Sunday.
Vishvendu Jaipuriar
Police open fire at extremists on Chatra- Palamau border

Hazaribagh: A gun battle took place on the border of Chatra and Palamau with police recovering leth machines used to make arms. Arms and ammunition was also found. Officials said extremists of Tritiya Prastuti Committee was present on the border when Palamau, Ranchi and Chatra police surrounded them from three sides following which the gun battle started. However, the extremists fled. (Vishvendu Jaipuriar)

One of the injured of the firing incident.
Vishvendu Jaipuriar
3 injured in firing at transport company in Chatra

Hazaribagh: Unidentified men opened fire and injured three on RKTC transport company camp office in Honhe village of Tandwa block. It is yet not clear as to who were behind this firing incident as an outsourcing company was earlier targeted. Police officials refused to come on record as they said it would be too early to say without proper investigation. But sources said investigation has started keeping in mind two angles, one involving extremists and other of dreaded Aman Sahu gang. Officials said firing was done to pressurise the company for levy. Officer-in-charge of Tandwa police station, Vijay Kumar Singh said raids have started to catch the culprits. (Vishvendu Jaipuriar)

Dhanbad: The dead body of a 22-year-old youth, Chhotu Kumar, a resident of Phusbunglow locality of Jharia was found lying on the railway track at New Panderpala area on Sunday morning. A team of Bank More police which reached the site after being informed by the local residents recovered the body and informed his family members after which his body was sent for postmortem at Sahid Nirmal Mahto Memorial Medical College of Dhanbad. Family members of the deceased informed police that he left the house on Saturday night and despite calling several times on his mobile phone he didn't receive the calls. (Praduman Choubey)