Move to create a new scholarship programme for ST/SC, OBC and minorities of the state 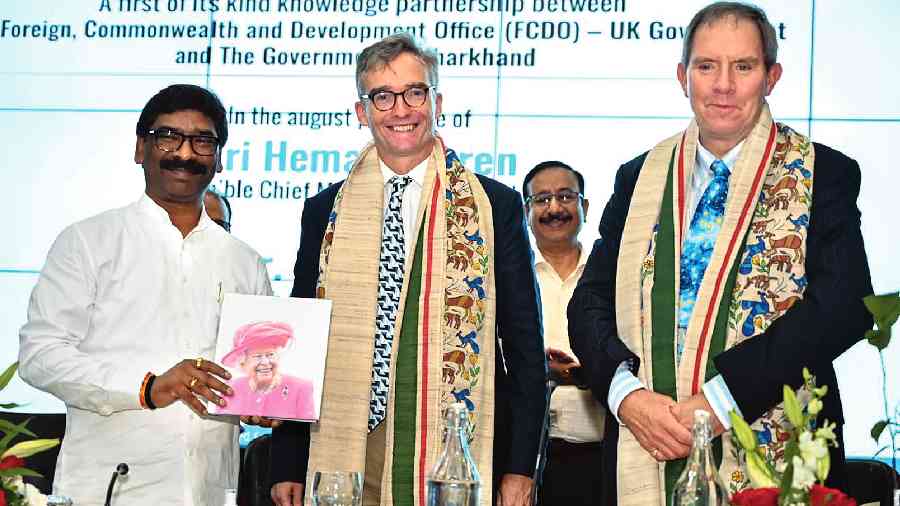 British High Commissioner to India Alex Ellis presents a book to Hemant Soren during the signing of the MoU at Ranchi on Tuesday.
Manob Chowdhury
Animesh Bisoee   |   Jamshedpur   |   Published 24.08.22, 02:14 AM

The Jharkhand government on Tuesday inked an MoU with the UK government to create a new scholarship programme for ST/SC, OBC and minorities of the state.

The MoU was signed in Ranchi by British High Commissioner to India, Alex Ellis, and tribal welfare secretary of Jharkhand, K.K. Soan, in the presence of chief minister Hemant Soren. Ellis is on a two-day visit to the state.

Chevening is the UK government’s flagship international scholarship and fellowship programme. The Chevening programme in India is the largest in the world, benefiting over 3,500 scholars and fellows since 1983.

The agreement is between the Foreign and Commonwealth Development Office (FCDO) of the British High Commission, New Delhi, and the department of tribal welfare in Jharkhand.

The UK also launched the Jharkhand module of the Climate Resilience Information System and Planning (CRISP-M) tool. The CRISP-M tool is a web and mobile phone-based geographic information system that will support the planning, implementation and monitoring of the Mahatma Gandhi NREGA scheme. It was developed as part of the UK government’s Infrastructure for Climate Resilient Growth in India programme.

The Jharkhand module of the CRISP-M tool will effectively help integrate climate risk management into the planning and design of social protection; inform early action on drought management with the Jharkhand Drought Early Warning System, and help build the resilience of households that are vulnerable to climate change.

The CRISP-M tool was co-developed by the International Institute for Environment and Development (a unit of FCDO, British High Commission) with Madhya Pradesh Council of Science and Technology, National Remote Sensing Centre, India Meteorological Department, Indian Institute of Tropical Meteorology and the ministry of rural development.

“Investing in education and climate are our best gifts to our children and grandchildren. With the support of chief minister Hemant Soren and our partners across the state of Jharkhand, we are able to do just that. Education in another country can be a defining experience. I’m pleased that each year five brilliant scholars from the state will have the opportunity to study at the UK’s world-leading universities with full financial support,” said Ellis.

“Jharkhand is the first state in the country providing such a scholarship for poor students to pursue higher education overseas by inking an agreement with the UK government. In the inaugural year (in 2021) under the Marang Gomke Jaipal Singh Munda Scholarship scheme, only tribal children had gone abroad to pursue higher education. In a very short time, the consent of the central government and the UK has been obtained. Now the scope of the Marang Gomke Jaipal Singh Scholarship scheme has been expanded to include OBC, SC and minorities meritorious students. The number has also been increased to 25,” said Soren in his address.

“The prime minister of the country had expressed the country’s commitment to zero net carbon emissions by 2070 during the COP 26 session in Glasgow last year. A target was set to take the country’s non-fossil energy capacity to 500GW by 2030. Jharkhand is also working on a plan to move forward with the same goal,” added Soren.

“Our government will try in coming days to work jointly with the UK government and the British High Commission in other areas and help the state move towards achieving sustainable development goal,” said Soren.

During his visit, the British High Commissioner also took part in a business roundtable and met a host of business leaders to explore opportunities to boost trade and investment linkages between the UK and the state of Jharkhand.