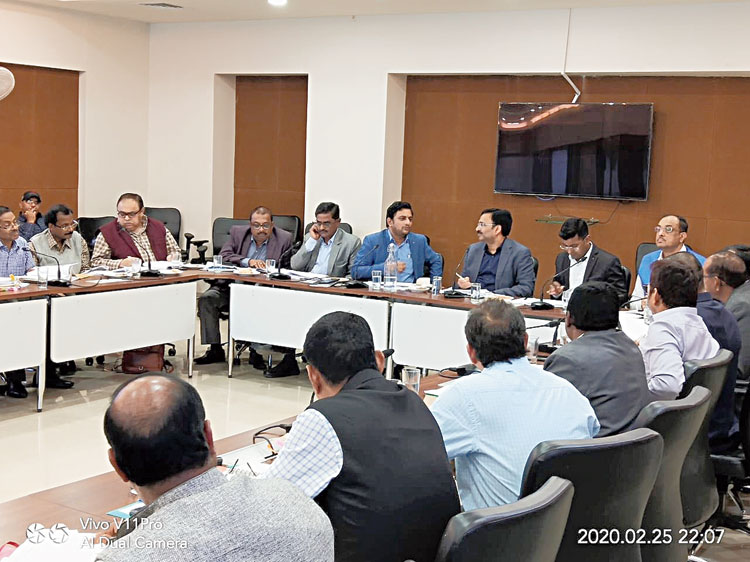 Officials at the review meeting of the urban development projects in Ranchi on Wednesday.
Telegraph picture
Our Special Correspondent   |   Ranchi   |   Published 26.02.20, 07:41 PM

Civic bodies will have to submit a plan by March 15 to the urban development department on coping with water scarcity during the summer.

Urban development secretary Vinay Kumar Choubey on Wednesday directed the state urban development authority (Suda) and directorate of municipal administration (DMA) to ensure that all civic bodies present the action plan to ensure there is no water crisis during the summer.

“Provision of drinking water including arrangement for proper water supply even during the summer season is our topmost priority,” Choubey said after conducting the first review meeting of the department at the Project Bhawan in Ranchi on Wednesday. “All the civic bodies must send an action plan to the department by March 15 on steps to be taken for ensuring water supply is not interrupted during the summer months between March and June.”

Urban development spokesperson Amit Kumar said the action plan was needed by March 15 so that the department can chip in with additional support to tide over any crisis.

“The department will study the action plan and decide on additional support, if any, required to ensure that residents do not face water scarcity during summers,” the spokesperson said.

Secretary Choubey asked Suda officials to ensure that completed piped water supply projects are inaugurated only after piped connection reaches 80 per cent of the beneficiary households.

“The objective is to ensure that all those households paying household tax derive benefit from the piped drinking water project soon after its inauguration instead of merely headline-grabbing inauguration programmes,” said a source in the department who attended the review meeting.

The urban development secretary also asked the civic bodies to accord top priority to solid-waste management.

“The civic body should coordinate with the district administration for necessary clearances including land sites for solid-waste management plants so that actual construction work commences at the earliest,” he told officials. “The waste management plants should be far away from inhabited areas of both urban and rural localities.”

Choubey prodded the civic bodies on early construction of houses for beneficiaries of the Pradhan Mantri Awas Yojana (PMAY) and on making provision of basic amenities in vendors’ zones in urban areas.

He also issued directives to ensure that shelter homes constructed in civic areas should benefit the maximum number of needy persons.