Heavy rain throws life out of gear in Bokaro, one missing

Gates of Tenughat, Konar and Garga dams opened, administration sounds alert to all residents of district 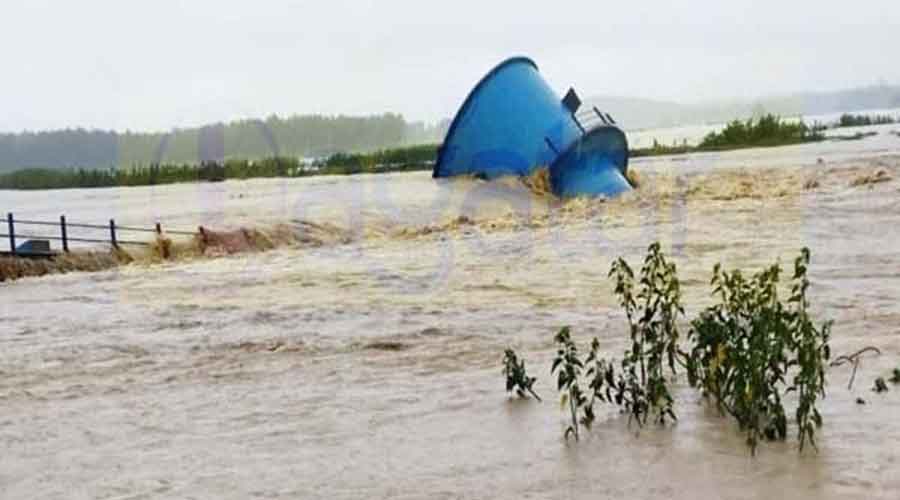 Heavy rainfall in the past three days has thrown life out of gear in Bokaro district.

A 14-year-old boy, Faizan Ahmed, went missing after being swept away while bathing in Garga River in Siwandih under Balidih police station and an intake well of rural drinking water supply scheme was washed away in Konar River at Chatrochatti under Gomia block of Bermo subdivision. High alert has been sounded in places near rivers.

Heavy waterlogging on streets, roads and national highways slowed down the traffic in the entire district. Trees were uprooted in many places. The prominent rivers are inundated with dams opening their radial gates.

Konar Dam has opened its six gates releasing 15000 cusec water per second causing the Konar River to overflow. Apart from the intake well, the four gates of barrage on the river also washed off and a transformer drowned in water causing an electricity crisis in few areas. Small bridges above the rivers have submerged completely.

The gates of Tenughat, Konar and Garga dams have been opened in the district. The water discharged from these dams has increased the water level in Damodar, Konar, Garga and Bokaro River of the district.

The water discharged from 3 dams has increased water level in Damodar, Konar, Garga and Bokaro river of the district.
The Telegraph picture

Meanwhile, Ijri and Gawai, the two subsidiary rivers of Damodar are also flooded.

The district administration sounded alert to the residents residing in the areas close to the rivers.

“Six radial gates of Tenughat dam were opened, in which 108141 Cusec of water per second is being discharged into the Damodar River,” said Pankaj Kumar, assistant engineer of Tenughat Dam Division.
Kumar said the water level of Damodar River is rising due to incessant rain. The water holding capacity of Tenughat Dam is 852 feet whereas at present the water level in Tenughat Dam is 861.5 feet. Meanwhile, the Bokaro Steel Plant (BSL), which controls Garga Dam, has appealed to residents to be cautious while crossing through the river as water level has increased. And keep their cattle away from the river and avoid going for a bath in the river.

A BSL officer said,“Two gates of Garga Dam have been opened 1.5 feet. This has increased the water level in the river which passes through Bokaro and Chas townships and lastly falls in Damodar River. Rise in water level in Damodar River has made Tenughat Dam authorities alert Bokaro and Dhanbad administration as well as West Bengal government from where it passes through.”

The district administration has alerted all the block-level officials and panchayat representatives about the flooded rivers. Block Development Officer, Bermo, Madhu Kumari has sent a voice message appealing people to be careful. She said the rivers are flowing above the danger mark. Along with this, patrolling is also being done continuously around the rivers. The district administration is continuously monitoring from the district control room so that there is no danger of any kind.