Rivers in spate, impact of the strongest rain-bearing system likely to last till Tuesday 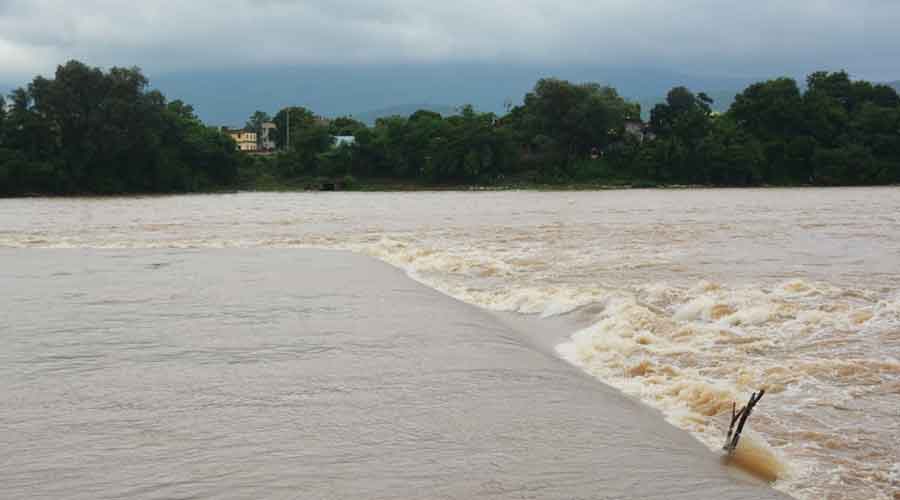 Heavy rain, triggered by a depression, drenched Jharkhand for the second day on Monday.

According to IMD officials, the low-pressure area which originated from  Bay of Bengal intensified into a depression, and later a deep depression, that crossed the coasts of West Bengal and Odisha, leading to heavy rain in Jharkand and the two neighbouring states from Sunday.

Jagannathpur in West Singhbhum topped the rain chart with 71 mm recorded during the past 24 hours (8.30 am of Sunday to 8.30 am of Monday).

An uprooted tree at Sakchi in Jamshedpur on Monday.
Picture by Bhola Prasad

Madhupur in Deoghar district recorded 63 mm rain while several places in the Kolhan region in southern Jharkand including Chakradharpur and Chaibasa recorded over 45 mm rain.

Jamshedpur, Ranchi, Latehar, Khunti, Simdega and its adjoining areas recorded over 30mm of rain. Ghatshila, Tenughat in Bokaro,Chandil in adjoining Seraikela-Kharsawan district, Chatra and several other places recorded over 20 mm of rain.

Met data indicated that over 20 IMD observatories recorded rainfall between 8mm and 15 mm.

The heavy showers in Jharkhand and neighbouring Odisha resulted in sudden rise of water levels in both Subernarekha and Kharkai rivers. Three radial gates of Chandil dam in Seraikela-Kharsawan district  and Bankabal dam in Mayurbhanj district of Odisha were opened on Monday due to the incessant rains.

Officials of the state  water resources department said water levels of both the rivers were flowing close to the danger mark on Monday afternoon.

The depression was crossing through Jharkhand on Monday and was likely to move towards north Chhattisgarh before reaching Madhya Pradesh in the next 48 hours.

Head of Ranchi Met Centre Abhishek Anand said the  system  turned into the strongest rain-bearing system of the month so far. He said the impact of the depression would be felt in Jharkhand till Tuesday after which rainfall would reduce as the system weakened.

Satellite pictures suggested that the  monsoon trough at mean sea level was on Saturday passing through Balaghat, Raipur and Sambalpur in neighbouring Odisha extending 0.9 km above mean sea level.

The Met centre also issued an alert of moderate lightning and thunder in isolated pockets of Jharkhand during the next 24- hours.