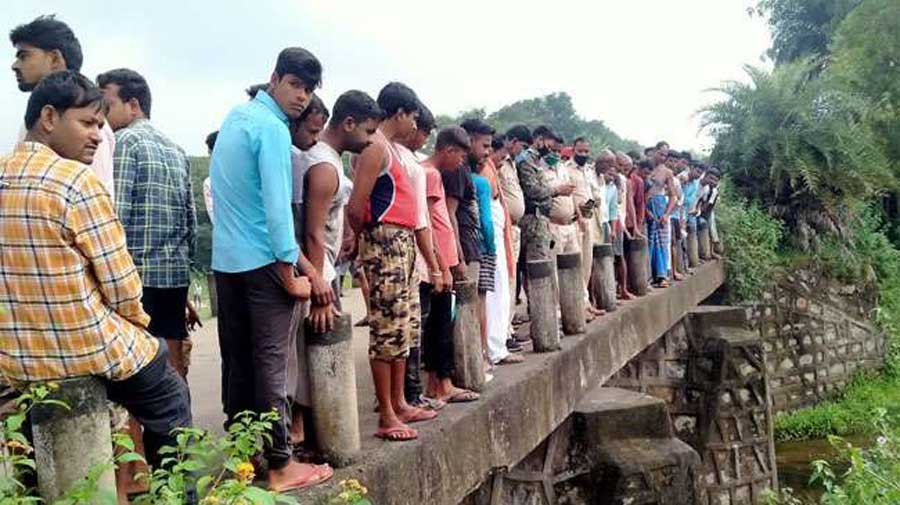 Villagers near the spot where the dead body was found in a river in Koderma on Tuesday.
Vishvendu Jaipuriar
Our Bureau   |   Published 23.09.20, 01:00 AM

A dead body was found in the Gauri river near the Chandawara-Jongi road in Koderma’s Chandwara block on Tuesday. Binod Swarnkar, a resident of Bajrang Bali Chowk in Chandwara, identified the dead as his son-in-law Ritesh Kumar Soni. He had gone out to meet someone on Monday night but did not return. Police have launched an investigation to find out who was behind the murder. The body was sent for post-mortem to Koderma sadar hospital. Soni’s motorcycle is missing. 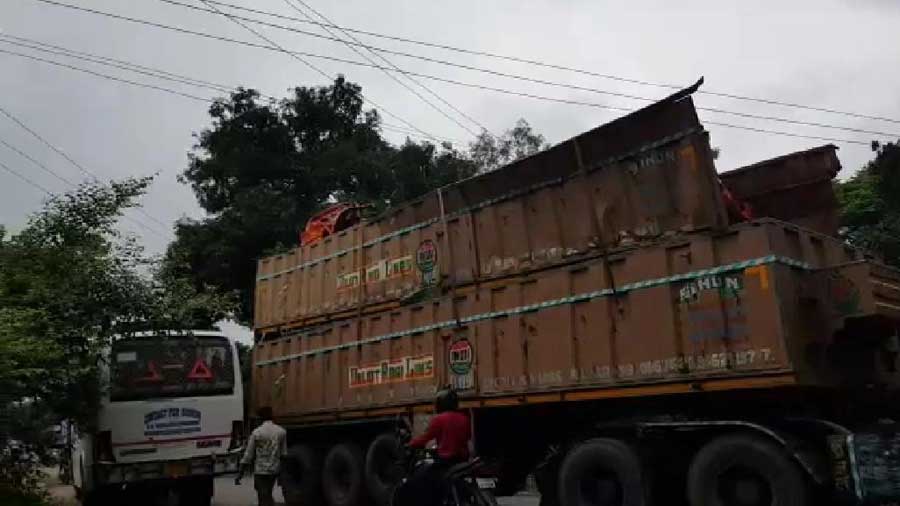 The low-hanging wire which claimed the life of a cleaner in Hazaribagh on Tuesday.
Vishvendu Jaipuriar
Electrocution death

The cleaner of a truck died by electrocution when he tried to remove a low-hanging wire which had come in the path of the vehicle in Hazaribagh on Tuesday. The incident took place near St Robert High School on Ranchi-Patna Highway (NH33). Police officers said the truck was on its way to Barhi. The dead body was sent for post-mortem to the Hazaribagh medical college and hospital.

One stabbed to death in Dhanbad
Advertisement

Gulam Ansari, 17, a resident of Dipu Dhaura at Digwadih area in the Jorapokhar police station area of Dhanbad was stabbed to death by Mohammed Sohail on Tuesday afternoon over personal rivalry around 3pm. The incident took place near an isolated spot about 200m from Ansari’s home.

Ansari was on his way to the market when Sohail attacked him and fled. Passers-by took him to a nearby nursing home from where he was referred to Patliputra Medical College & Hospital, Dhanbad, where he died during the course of treatment in the evening.

According to Ansari’s relatives, Sohail had threatened to kill him several times. 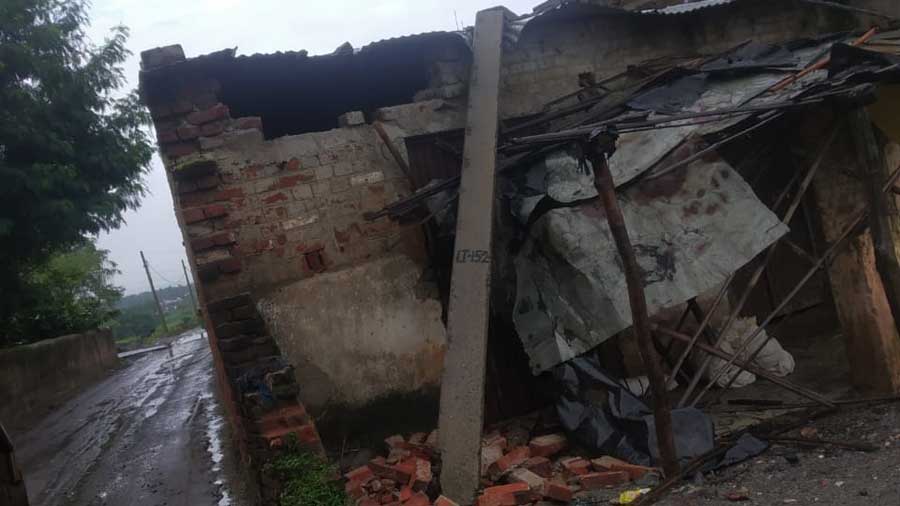 The pole which fell on a Barkatha home on Tuesday.
Vishvendu Jaipuriar
Electric pole falls on house, injures two

A speeding tanker struck an electric pole which fell on a house and injured a woman and her son at Kosma in Barkatha, around 65km from the Hazaribagh district headquarters.

Police said the driver lost control of the vehicle and hit the pole on Tuesday afternoon. It fell on a nearby house, injuring Rakhi Devi, 30, and her five-year-old son, Langu Saw, who were sitting outside. Local residents caught the driver and handed him to the police. The injured duo were provided treatment at the local government hospital.

Anupriya Mishra, 32, the married daughter of former BCCL director (technical) D.C. Jha on Tuesday lodged an FIR against a coal trader, Badal Gautam, in Bank More police station alleging rape and jewellery theft. Mishra had reached Dhanbad from Calcutta along with a friend, Sanket Krishnani. Gautam is a friend of Krishnani who allegedly raped her during her Dhanbad stay.

Fifteen criminals took the three security guards of the company hostage and then proceeded to rob the site.

Sixty-eight people were discharged on Tuesday from various Covid-19 treatment facilities in Dhanbad. Twenty people were discharged from Nirsa Polytechnic, 18 from the railway zonal training institute at Bhuli, 15 from PMCH Cath lab, seven from Tata Central Hospital at Jamadoba, three each from the BCCL regional hospital in Bhuli and CIMFR health centre and two from Wedlock Greens.

Dhanbad deputy commissioner Uma Shankar Singh said that the discharged persons will have to remain in home quarantine for the next 14 days. They have been provided medical kits.