Covid norms go for a toss at Sakchi weekly market

Crowds of shoppers, vendors throw caution to the wind 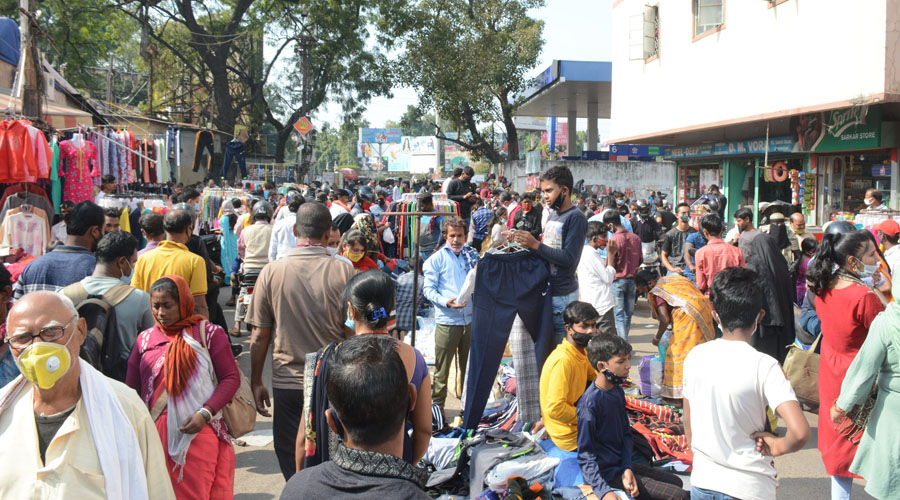 The East Singhbhum district administration, which has launched a massive crackdown on those who refuse to wear masks in the steel city, was unable to check violation of social distancing norms at the busy commercial hub of Sakchi on Tuesday.

At the weekly fair of footpath vendors, referred to as Mangala Haat, there were huge crowds. People flocked the market in large numbers since 10 am making purchases of various household items including garments.

Both vendors and customers flouted social distancing norms. Maintaining a distance of one metre is the usual norm inside the market. But no one paid heed to this norm.

Several vendors and shoppers weren’t wearing masks either. The haat was open till evening.

"Tuesday’s situation was horrible. When Covid-19 cases are making a comeback in other parts of the country, the local district administration should be vigilant and prevent such violations inside a market," pointed out Satya Narayan Agarwal, who owns a garment store at Sakchi.

Singhbhum Chamber of Commerce and Industry (SCCI) has taken note of it.

"Some permanent shopkeepers had approached us with complaints of violation of social distancing norms by footpath vendors and buyers. We have requested the district administration to provide an alternate place to footpath vendors for the weekly haat," said Bharat Vasani, vice-president of the trade outfit.

Ravi Bharti, city manager of Jamshedpur Notified Area Committee (JNAC), said efforts were being made to provide an alternative place to vendors to prevent crowding of the market.