Owners want classes to be allowed, hand over memo to visiting minister 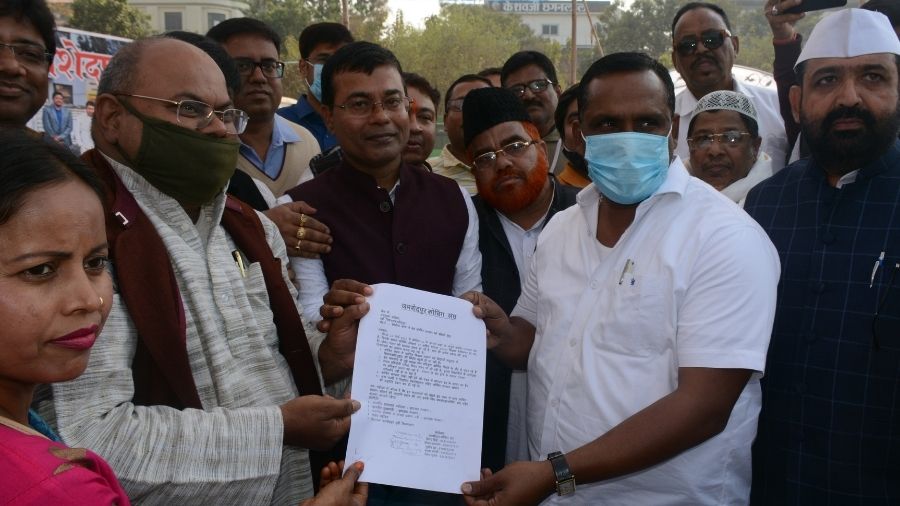 Members of the Jamshedpur Coaching Association hand over a memorandum to minister Banna Gupta at Ambagan ground in Jamshedpur on Saturday.
Picture by Bhola Prasad
Pinaki Majumdar   |   Jamshdepur   |   Published 23.01.21, 06:11 PM

Coaching centre owners and operators staged a day-long hunger strike at the Ambagan ground in Sakchi here on Saturday to demand the reopening of coaching institutes shut down ever since the Covid-19 induced lockdown was imposed in March last year.

The gathering, comprising owners, directors and teachers, was held under the  aegis of Jamshedpur Coaching Association.

"Coaching institutes should be allowed to reopen given that the state government has allowed schools to start functioning. Even in neighbouring Bihar, private tutorial houses have been allowed to function from January 4, " pointed out Krishna Banerjee, a member of the association and director of a Sakchi-based engineering coaching centre.

Banerjee said that during the last 10 months, they have all been abiding by government directives. Another association member, Vinay Singh, said that prolonged closure of coaching institutes was adversely affecting the livelihood of numerous professionals associated with them.

"It is also affecting students preparing for engineering and other competitive examinations,” he said, adding that all the coaching institutes were incurring huge losses.

Another private tutorial owner said, “It is beyond our understanding why coaching centres not allowed to function when schools can. Allow us to also function with similar conditions. We will abide by every protocol set by the government to curb the spread of the virus.”

The association members said that they would not hesitate to launch a state-wide agitation if their appeal were ignored. They also threatened to intensify their agitation.

Later, the members of the association handed over a memorandum to state health minister Banna Gupta, who also looks after the disaster management portfolio, asking that their concerns be looked at “sympathetically”. The minister was at the venue to attend a function to mark the 125th birth anniversary of Netaji Subhas Chandra Bose.