However, travellers can get in touch with auto-rickshaw operators directly for ferrying them privately 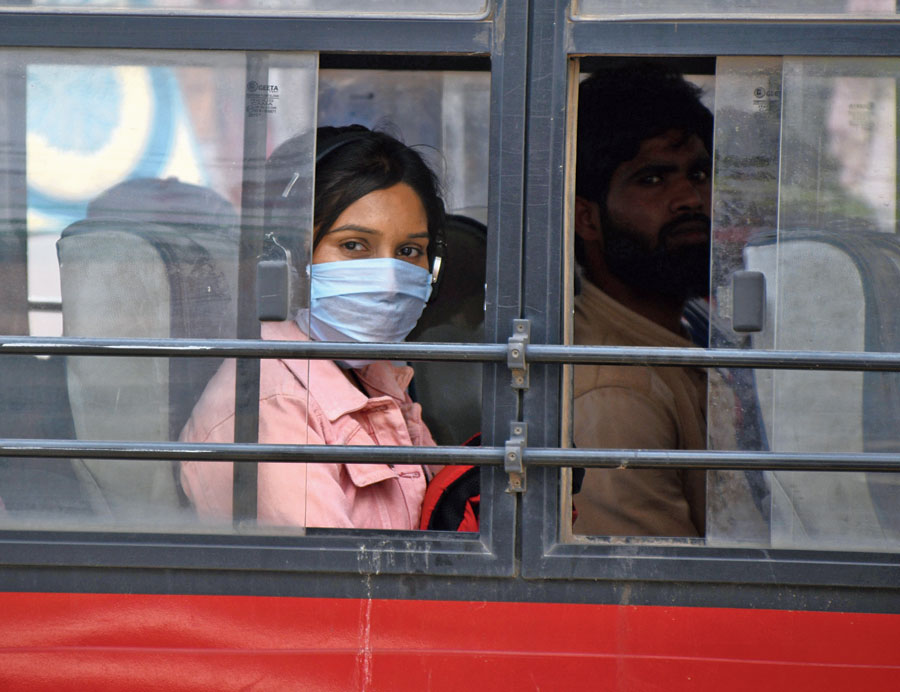 A woman with a face mask looks out of a bus window on Main Road in Ranchi on Saturday.
Picture by Manob Chowdhary
Our Special Correspondent   |   Jamshedpur   |   Published 21.03.20, 07:02 PM

People arriving via train or bus in the steel city will have problems reaching their destination on Sunday as all modes of public transport will remain off the roads for the Janata Curfew (self-imposed lockdown) from 7am and 9pm.

“We have taken a decision not to ply auto-rickshaws tomorrow (Sunday) during the stipulated period of the Janata Curfew,” said Shyam Kinkar Jha, general secretary of the Shikshit Berozgar Tempo Chalak Sanchalak Sangh.

There are nearly 20,000 auto-rickshaw operators in and around the city and it is one of the most preferred modes of conveyance in the city.

However, Shyam Kinkar said travellers can get in touch with auto-rickshaw operators directly for ferrying them privately.

Similarly, the private town bus service will also be shut.

“We have decided to shut down all buses during the Janata Curfew as part of our responsibility to stop the spread of novel coronavirus,” said Dilip Jha, general secretary of Shikshit Berozgar Mini Bus Association. “This apart, acting on the advisory issued by state transport department, we have decided to remove seat covers and curtains in the buses from Saturday. Even after the Janata Curfew, we will run buses on rotation basis. On any given day only 50 per cent of the buses will ply on different routes. We have also encouraged bus operators to install sanitizers in the buses.”

Long-distance buses will also be off the roads on Sunday.

“None of the buses will run during the period of Janata Curfew. Buses will start after 9 pm. Buses can arrive from other destination to the city at the Sitaramdera terminus,” said Uday Sharma, president of the Jamshedpur Bus Owners Association — an umbrella body of long-distance bus operators.

More than 30,000 passengers take more than 500 buses daily for various destinations in Jharkhand, Bihar, Bengal, Uttar Pradesh and Odisha from the Sitaramdera bus terminus, which is the only inter-state bus terminus in the steel city.

“It (the curfew) is an advice to keep social distance to avoid spread of Covid-19 and an appeal to the masses, and we will not take any penal action for violation,” the SDO said. “We expect everybody to heed to the appeal. However, those who have emergencies can travel. Emergency services will be open in the city.”