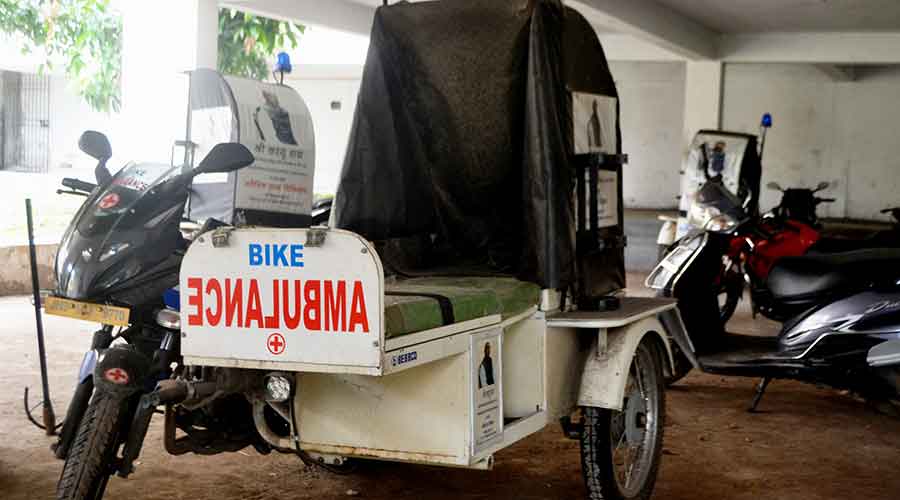 One of the three bike-ambulances parked on the premises of district civil surgeon office at Khaasmahal on Monday.
Animesh Sengupta
Kumud Jenamani   |   Jamshedpur   |   Published 28.06.21, 05:50 PM

Bike-ambulances will soon be introduced in at least three government-run health hubs in the steel city.

The three bike-ambulances had been provided to the district health department by the then Jamshedpur West's legislator Saryu Roy in 2018, meant for carrying patients from a place having unmotorable roads. However, the ambulances were never used until the legislator himself wrote to the district civil surgeon recently.

The ambulance has a covered bed and is fitted with a siren. Its most significant feature is it can move through narrow roads which a regular ambulance may face difficulty in maneuvering.

Having received Roy's letter on Thursday, the civil surgeon A.K. Lal is getting the bike-ambulances ready and will shortlist the names of the health hubs that will receive them.

"We had got three bike-ambulances from MLA fund of the Jamshedpur West legislator Saryu Roy. These vehicles were to get operational under National Urban Health Mission. As there was shortage of manpower, these vehicles lay unutilised. But now we have decided to put them into use at the earliest," said the district civil surgeon to The Telegraph Online.

Lal admitted that they were prompted to utilise the bike-ambulances after getting a reminder letter from the legislator recently and have decided to hand one of the vehicles to the Jugsalai Primary Health Center.

"We are looking into the options for using the remaining two bike-ambulances to other health hubs soon," said the civil surgeon.

Roy, a former BJP leader and presently the Jamshedpur East assembly constituency legislator, said he had recommended the bike-ambulances as there are many congested localities in the steel city where a regular ambulance cannot pass through.

"It would have been better if the district health department had started using the bike-ambulances a year ago when the city was reeling under the first wave of the pandemic, "observed the Jamshedpur East legislator while talking to The Telegraph Online.