Army buys farmer's watermelon harvest after he offers it for free

Soldiers visit the 25- acre farm at Kander with gifts, groceries and food packets for labourers 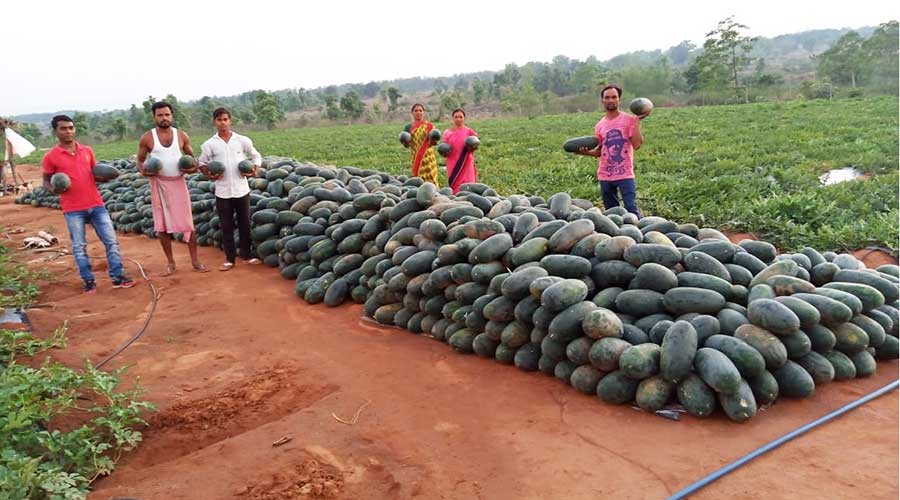 Farmers wait for buyers for their watermelon harvest at their farmlands in Gomia Block of Bokaro.
The Telegraph picture
Our Bureau, Agencies   |   Bokaro, Ramgarh   |   Published 11.06.21, 12:45 AM

Unable to sell his watermelon harvest due to the Coronavirus-induced lockdown, a 25-year-old Jharkhand farmer offered five tonnes of his produce to soldiers of the Sikh Regimental Centre at Ramgarh, who in turn, bought it at the market price.

Touched by the gesture of Ranjan Kumar Mahto, a Ranchi University graduate who chose farming as a profession, SRC officers including Commandant Brigadier M. Sri Kumar visited his farm in adjoining Bokaro district and bought the produce.

The soldiers and their family members visited the 25- acre farm at Kander with gifts, groceries and food packets for farm labourers and took the 5-tonne produce in their own vehicles to SRC, located 15km away.

"It was heartening to see drip irrigation on 25 acres of land but unfortunately, the poor farmer could not sell the produce. We saw women workers too.

"We came to know that he had launched the venture two years ago but suffered losses due to the COVID-19 pandemic and cyclone Yaas," Brigadier Kumar, also the president of the Ramgarh Cantonment Board, told PTI.

Mahto had decided to make agriculture his profession after failing to get a job.

He took the 25-acre land on lease at an annual rent of Rs 5,000 per acre and undertook watermelon cultivation on six acres with an investment of Rs 15 lakh. A majority of his total 120-tonne watermelon harvest is still in the fields waiting for buyers.

"There were no buyers during the lockdown. The crop started to rot. Nobody in the village was ready to buy it even for Rs 2 per kg. We sought help from various circles but to no avail.

"Finally, I decided to offer the produce to our brave soldiers for free and approached the cantonment," he told PTI.

Mahto has employed around 40 women labourers and also planted capsicum, brinjal and other vegetables.