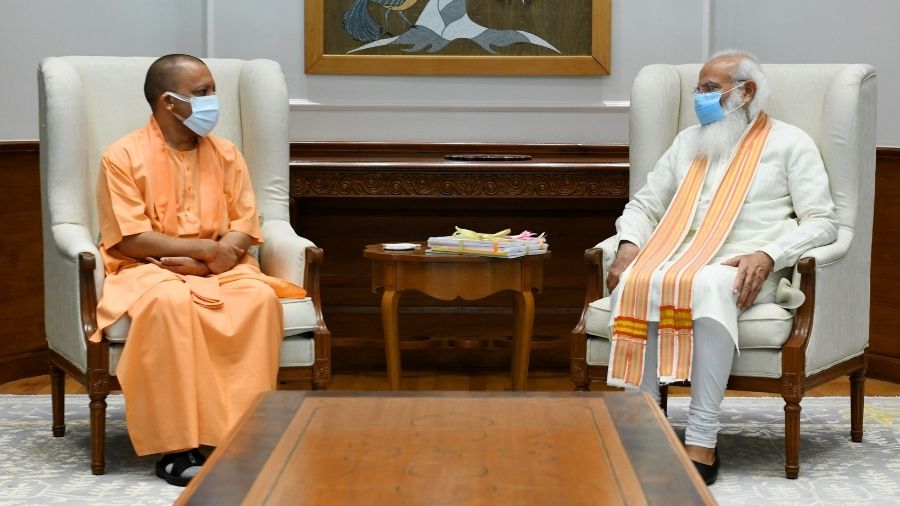 The chief minister, who is on a two-day visit to the national capital from Thursday to meet the BJP top brass, is also scheduled to meet party president JP Nadda in the afternoon.

His visit comes close on the heels of the party holding a series of review meetings in Lucknow, which had fuelled speculation of a ministerial reshuffle in the state. There have been reports of simmering discontent in the state unit over his style of leadership in the run-up to Assembly elections.

During his meeting with Shah, Adityanath presented a copy of the report 'Solution of Migrant Crisis'.

Party insiders confirmed that the unscheduled meetings were tied to the Uttar Pradesh polls, due next March, which have become crucial for the BJP after the Covid mismanagement battered the government’s image and the crushing defeat in Bengal dimmed Modi’s “aura”.

His visit to the national capital started a day after Jitin Prasada quit the Congress and joined the BJP.

BJP MLC A K Sharma, a former IAS officer who is seen as a trusted hand of Modi, is also in Delhi to meet party leaders and allies.

Though there is no official word on whether there will be a Cabinet expansion in Uttar Pradesh, sources said Prasada, who comes from a noted Brahmin family of the state with political heft, and Sharma may be accommodated in such an eventuality.

BJP's general secretary (organisation) B L Santhosh had earlier this month visited the state to review the party's preparations for the assembly elections and held meetings with key ministers and organisation leaders.

Senior BJP leader Radha Mohan Singh, who is in-charge of the party's affairs in Uttar Pradesh, had also visited the state.