Advertisement
Home / India / Why is India falling in the World Press Freedom Index?

Why is India falling in the World Press Freedom Index? 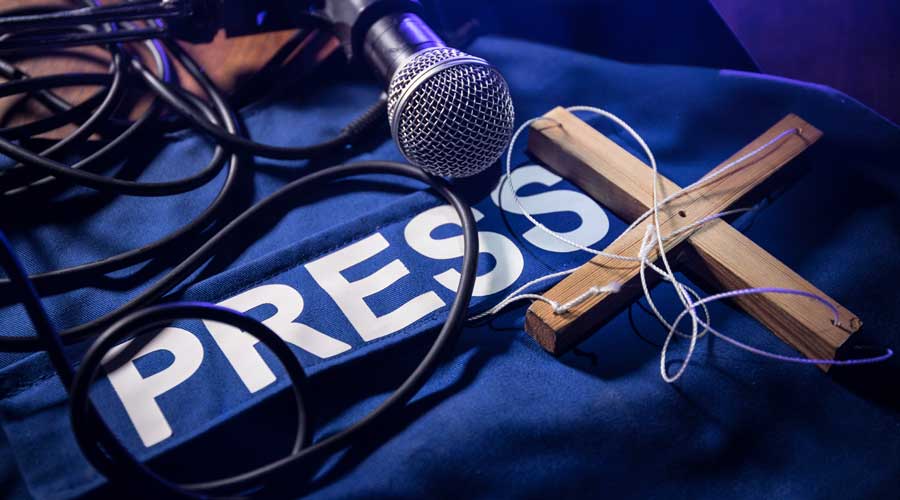 India fell eight places in the World Press Freedom Index, down to 150 out of 180 countries. Critics say the ranking reflects increased pressure and violence against journalists.
India's press freedom ranking fell from 142 in 2021 to 150 this year, according to global media watchdog Reporters Without Borders (RSF), which published its 2022 World Press Freedom Index (WPFI) on Tuesday.

The report highlights the degree of freedom that journalists, news organizations and netizens have in each country, and respective governments' efforts to respect such freedom.

The ranking of all of India's neighbors except Nepal has also slid, with the index placing Pakistan at 157, Sri Lanka at 146, Bangladesh at 162, and Myanmar at 176.

"The violence against journalists, the politically partisan media and the concentration of media ownership all demonstrate that press freedom is in crisis in the world's largest democracy, ruled since 2014 by Prime Minister Narendra Modi, the leader of the Bharatiya Janata Party (BJP) and the embodiment of the Hindu nationalist right," the report said.

The indicators used by RSF were based on a quantitative survey of press freedom violations and abuses against journalists and media, along with questionnaire responses from hundreds of press freedom experts.

Analysts and media commentators say India once prided itself on having a vibrant and diverse press, but that it has started moving in the opposite direction in recent years.

A rapidly expanding media landscape
The Indian media industry has massively expanded since the 1990s. There are now more than 100,000 registered newspapers and magazines as well as nearly 400 news channels in various languages. Some 150 news channels are awaiting clearance from the government.

Broadcast television channels, like the print media in India, are self-regulated and often have strong political affiliations and corporate ownership, with no regulations on cross-media ownership.

The RSF report emphasizes that since Modi came to power matters have changed radically for the Indian press, which used to be seen as fairly progressive.

According to the report, his government has "engineered a spectacular rapprochement between his party, the BJP, and the big families dominating the media."

"Since he came to power, Narendra Modi has considered journalists as mere intermediaries polluting his relationship with his devotees," Daniel Bastard, RSF's Asia-Pacific director, told DW.

"This narrative has led critical journalists to be systematically deemed as anti-national and anti-India. This can have dramatic repercussions, like the dreadful murder of journalist Gauri Lankesh in 2017. We call on the government to deeply review its policy towards the press," he added.

Critics have accused media outlets of lowering the quality of India's public discourse. Media expansion has led to a shrinking of the public sphere, resulting in the spread of elitist and socially conservative values.

Sanjay Kapoor, the secretary of the Editors Guild of India, says that many television channels have reduced themselves to mouthpieces of those in power, "a role they seem only too happy and proud to play," he told DW.

A 'hyper partisan' press
"Nothing is better news for those in power than a pliable press that is hyper partisan. This shrinks the middle ground where free and independent media best thrives," he added

The RSF report also underscored the example of the "Reliance Industries group led by Mukesh Ambani, now a personal friend of Modi's, who owns more than 70 media outlets that are followed by at least 800 million Indians.”

Several media owners, who owe their allegiance to the powers that be, or who want their business interests furthered, have started putting pressure on journalists to curb reporting, change editorial direction or just practice self-censorship.

"Press freedom is dismal because mainstream media proprietors do not take on the government on its press freedom record, and are hugely dependent on government advertising," Sevanti Ninan, a media critic, told DW.

Ninan, who was the founding editor of "The Hoot," which was the first media watchdog in India, also referred to political pressure on journalists, which included harsh tactics such as the indiscriminate use of sedition and terror laws.

"It is both online and street harassment. Whether matters will get worse depends on how insecure the government gets about its political future," said Ninan.

Several journalists behind bars
According to the RSF report, 13 journalists are currently behind bars in India and one has been killed since January this year. Various independent reports said that 55 journalists had been arrested, booked and threatened for reporting on COVID-19 during the pandemic.

In Indian-administered Kashmir, journalists have found themselves caught between warring sides, and their situation has gotten dramatically worse since India revoked the region's semi-autonomy in 2019.

"The situation is also still very worrisome in Kashmir, where reporters are often harassed by police and paramilitaries, with some being subjected to so-called "provisional" detention for several years," the report said.

The government did not officially react to the latest ranking, but last year it disagreed with the conclusions that RSF drew.

Indian Minister of State for Home Affairs Nityanand Rai told parliament last month that the methodology used by RSF was questionable as it was based on a "very low sample size" and "lack of clear definition of press freedom."

OpIndia, an Indian right-wing news portal, said the methodology espoused by RSF revealed "a biased index tailor-made to peddle the global left's narrative, and is naive at best, and malicious at worst."