Watershed moment for the history of Indian agriculture: Defiant Modi on farm bills

The PM posted a series of tweets, in Punjabi apart from Hindi and English, asserting that the three bills would transform the lives of farmers 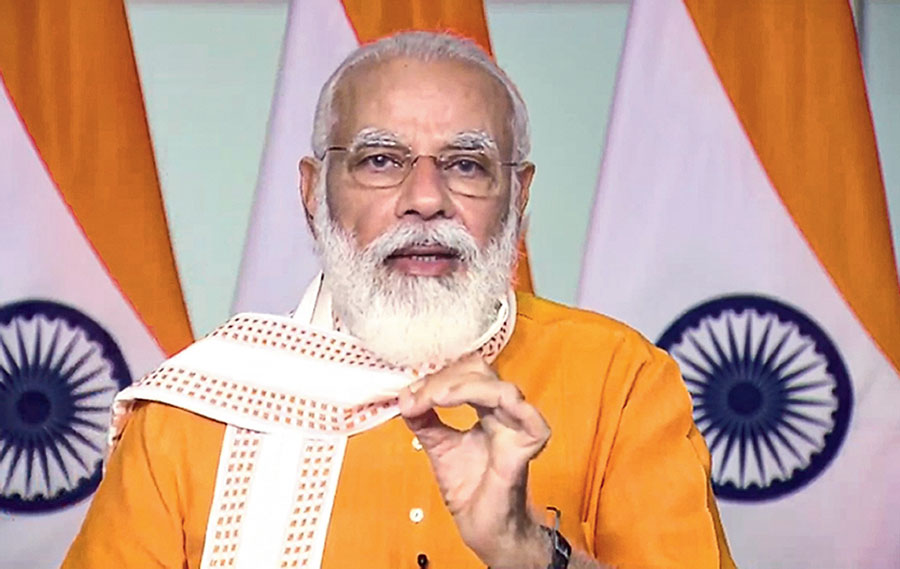 Narendra Modi's choice of Punjabi was an attempt to assuage concerns in a state where the farmers’ protests have been the most intense, forcing BJP ally Shiromani Akali Dal to pull out its lone cabinet minister from the central government.
PTI
J.P. Yadav   |   New Delhi   |   Published 21.09.20, 01:40 AM

Prime Minister Narendra Modi on Sunday termed the passage of the farm bills as a “watershed moment in the history of Indian agriculture”, exhibiting defiance in the face of intense protests by peasants’ organisations and risking losing allies.

“A watershed moment for the history of Indian agriculture! Congratulations to our hardworking farmers on the passage of key bills in Parliament, which will ensure a complete transformation of the agriculture sector as well as empower crores of farmers,” he tweeted.

Modi posted a series of tweets, in Punjabi apart from Hindi and English, asserting that the three farm bills would transform the lives of farmers.

The Prime Minister’s choice of Punjabi was an attempt to assuage concerns in a state where the farmers’ protests have been the most intense, forcing BJP ally Shiromani Akali Dal to pull out its lone cabinet minister from the central government.

Led by Modi, BJP ministers, MPs and leaders went into an overdrive to tom-tom the bills as an unprecedented measure for the welfare of farmers and slam the Congress and other parties for trying to block the reforms.

The bills have triggered massive protests by farmers’ outfits in Punjab and Haryana that are now spreading to other states.

Modi’s tweets and the manner in which the government pushed the bills through both houses of Parliament, riding roughshod over the Opposition, reflected a sense of determination and defiance that was in sharp contrast to the government in 2015 backtracking from a pro-industry land acquisition bill, buckling under similar protests by farmers.

The Akalis, the BJP’s oldest ally, have this time cautioned the government against underestimating the strength of farmers.The RSS’s economic wing, the Swadeshi Jagran Manch, and farmers’ arm Bharatiya Kisan Sangh had demanded that the government insert a clause guaranteeing at least the minimum support price for farmers even when they sell their produce to private players. The government, however, disregarded this demand too.

Asked about the RSS outfits’ demand, defence minister Rajnath Singh said: “There was no such provision earlier too.”

Ashwani Mahajan, co-convenor of the Swadeshi Jagran Manch, told The Telegraph: “Our demand stands and we will continue to press for it. This government is pro-farmer and we are sure it will protect the rights of the farmers.”

Mahajan stressed the need to provide protection to farmers from big corporate entities. “Corporates have the right to fix the MRP (maximum retail price) of their products. The farmers should at least be guaranteed minimum support price,” he said.

Internally, the RSS and its affiliates are uncomfortable with the government’s rush.

“The farm bills are not like the land acquisition bill that was blatantly anti-farmer; still we should be cautious,” an RSS leader said.

While Akali Dal’s Harsimrat Kaur Badal has already quit the Modi government, the BJP appears to be on collision course with another ally as well — the Jannayak Janata Party in Haryana. So far the BJP has been able to keep JJP boss Dushyant Chautala calm but he too dangled the threat of resignation on Sunday.

“I will quit my post the day any danger is posed to the MSP system,” Dushyant, the deputy chief minister in the BJP-led government, told news agency ANI after the passage of the bills. “There is no mention of ending the MSP system in the bills passed,” he added.

The government, however, sought to project an image of nonchalance. A battery of ministers led by Rajnath, who claimed he too was a farmer, were fielded to attack the Opposition for “spreading lies” and assure farmers that their income would increase after the new provisions come into force.

“Narendra Modi now feels he has decimated the Opposition and with his excellent connect with the people he’ll be able to convince the farmers,” a BJP old-timer said, fearing that such over-confidence could be “misplaced”.