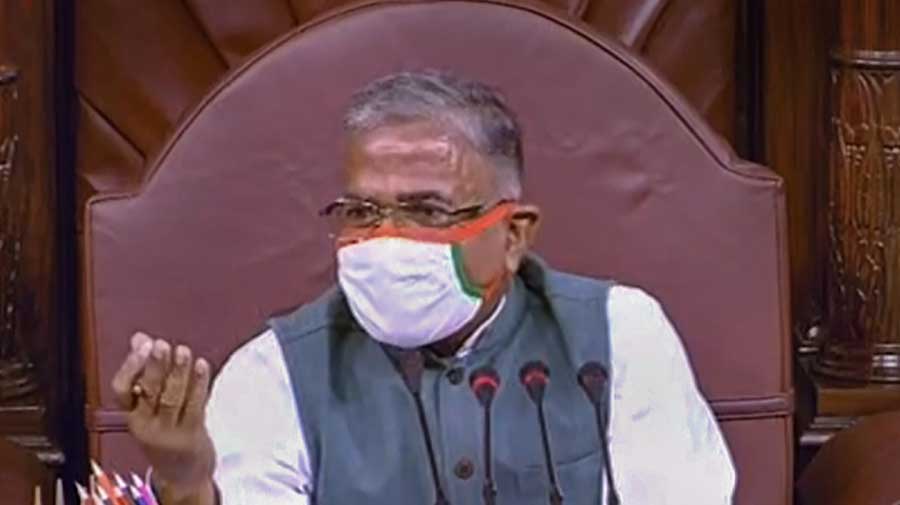 Two contentious farm bills were steamrollered through Parliament on Sunday with the Rajya Sabha passing these by a much-contested voice vote amid protests.

Such was the outrage that 12 Opposition parties have moved a no-confidence motion against deputy chairman Harivansh who was elected less than a week ago on last Monday.

The Farmers’ Produce Trade and Commerce (Promotion and Facilitation) Bill, 2020, and The Farmers (Empowerment and Protection) Agreement on Price Assurance and Farm Services Bill, 2020, have been portrayed by the government as a facilitator that will help farmers to sell their produce to big players.

The Opposition has described the bills as a “death warrant” on farmers that undermine price guarantees and leave them at the mercy of corporates.

The bills were passed in a melee in the Rajya Sabha. The Lok Sabha had earlier cleared them.

Not just the regular Opposition but even parties seen as friendly to the Narendra Modi government were either opposed to the bills or wanted to send them to the Select Committee.

Among the sceptics were the AIADMK, TRS and the BJD. With the Akali Dal pulling out its minister, the BJP was left friendless, barring the JDU — a turn of events that must have turned the government with a brute majority cautious.

Ignoring calls for a division (vote), the amendments moved by Opposition to refer the bills to the committee were defeated by voice vote.

When any member seeks a division, House Rule 252 says: “If the opinion of the Chairman as to the decision of a question (by voice vote) is challenged... he shall order a division to be held, under which the votes can be recorded and matter decided”.

Trouble began when the government sought to extend the day’s sitting till the passage of the bills, which have triggered protests by farmers across several states. This was immediately contested by the Opposition, which said there was no consensus in the House.

The government showed no signs of relenting, Opposition MPs entered the Well to protest and in the din that ensued, a mike on the presiding officer’s table was broken, a rule book torn and papers thrown towards the Chair.

A short adjournment followed. Marshals were called in and made to stand as a human wall around the Parliament reporters’ table and the Chair to keep the protesting MPs away.

On Sunday, there was considerable support for the Opposition amendments seeking to refer the bills to the Select Committee.

AIADMK’s S.P. Balasubramoniyan said the bills had been “enacted to make contract farming legitimate so that big businesses and companies can cultivate vast swathes of land on contract. This is like disinvestment of Indian farming sector and selling it to big corporates and MNCs.’’

Picking on the BJP’s Bhupendra Yadav’s description of the bills as ushering in “New Age Agriculture”, K. Kesava Rao of the TRS — a party that usually goes along with the government — said: “We are totally against this new age…. Now, you are pitting the poor farmers against rich corporates…. The government has set out to kill the golden goose. Agriculture is the only sector that beat the pandemic in the April-June quarter.’’

BJD, another party that is unaligned but votes with the government, stressed the need to send the two bills to the Select Committee for further consideration.

The BJD and the AIADMK may not have voted against the bills but there was an indication that they would support a move to refer them to the Select Committee, strengthening the Opposition’s chances of stalling them.

BSP’s Satish Chandra Mishra demanded that the government amend the bill to provide for MSP (minimum support price) protection under the new regime.

Responding to the BJP’s allegation that the Opposition was spreading rumours about abolition of MSP in the new bills, Shiv Sena’s Sanjay Raut asked if the Akali Dal minister resigned from the Modi cabinet on the basis of rumours.

The Left parties demanded an amendment to protect MSP so that farmers are reassured.

Through Yadav, the BJP’s counter to much of the criticism was that the Congress had left farmers in the lurch and the Modi government was making a course correction. It said the Congress manifesto, too, had promised the end of the Agriculture Produce Market Committees.

Ahmed Patel of the Congress responded: “You are selectively quoting our manifesto to suit your agenda. I challenge you to implement the rest of what we have promised also.”