Modi back to blaming Opposition 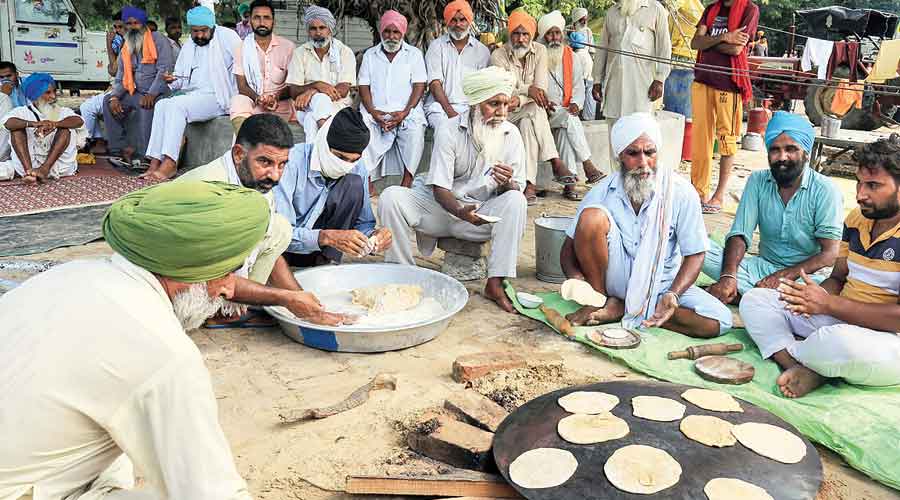 Prime Minister Narendra Modi on Friday accused the Opposition of spreading “misinformation” on farm bills and appealed to the farmers not to get misled, describing the new measures as historic.

Modi’s statement, a day after oldest ally Akali Dal had pulled out its lone minister, was seen as a damage-control exercise at a time the farmers’ agitation was threatening to spread and another ally, the Jannayak Janata Party (JJP) in Haryana, had come under pressure to quit.

“Misinformation is being spread that wheat and rice will not be procured by government agencies. This is an absolute lie, completely wrong and an attempt to deceive the farmers,” Modi said while inaugurating another round of development projects in poll-bound Bihar.

Despite widespread opposition and the resignation of the Akali Dal minister, the Centre has so far suggested it is determined to push the changes that allow farmers to sell produce directly to bulk buyers and make contract-farming easier. The set of three farm bills has been passed by the Lok Sabha and will be taken up by the Rajya Sabha.

The farm bills give legislative heft to three emergency executive orders issued in June by the Union cabinet with the stated objective of reforming the antiquated Agriculture Produce Marketing Committee (APMC) Act.

The act includes a rule that forces the farmers in many states to sell their produce only at regulated wholesale markets.

The government says the new farm laws will “unshackle” the farmers and help them get better prices. But many farmer organisations oppose the legislation because they fear that if big buyers start buying directly from the producers, the small growers will hardly have any bargaining power.

Modi’s angry attack on the Opposition came as the political impact of the farm bills threatened to spread to Haryana where the BJP government is dependent on the support of the 10 MLAs of the JJP, led by deputy chief minister Dushyant Chautala. The BJP has 40 MLAs in the 90-member Assembly.

Punjab and Haryana have witnessed intense protests by farmers’ organisations against the bills.

Chautala’s party, like the Akali Dal in Punjab, draws its support from farmers and has come under pressure to quit the state government after Harsimrat’s resignation from the Union ministry on Thursday.

On Friday morning, Chautala was learnt to have met chief minister Mahohar Lal Khattar and then gone into a huddle with his party colleagues. He has not said anything yet about the three farm bills.

The Congress sought to taunt Chautala. “Dushyantji, following Harsimrat Kaur Badal you should have resigned at least from the Deputy CM post. You are more attached to the chair than farmers,” Congress spokesperson Randeep Surjewala tweeted.

In this backdrop, Modi made an impassioned appeal to the farmers and allies, contending that the bills aimed to liberate the farmers from the clutches of middlemen.

“I want to tell my farmer friends, beware of these people (Opposition) who ruled for decades and are now trying to misguide you,” Modi said. He accused the Opposition of trying to protect “middlemen” who “loot” the farmers.

Modi used the phrase “yeh log” (these people) for the Opposition and claimed that in their manifesto they had promised to amend the APMC (Agriculture Produce Market Committee) Act, but were now raising objections for political gain after his government had made the required changes.

Farmers’ bodies in Punjab and Haryana have been protesting against the bills, claiming that by deregulating the farm produce market, the government would deprive farmers of the minimum support price (MSP) for their produce. Also, they fear that permitting contract farming would allow corporate houses to exploit the farmers.

Modi sought to allay these fears and stress his government’s commitment to continuing with the MSP regime, but added that the reforms would open many more options.

“Farmers have been given new independence. They’ll now have more options.… They can sell their produce in any market of the country,” he said, emphasising that the new provisions aim to “unshackle” them.

Modi said he was sure the farmers would see through the designs of those trying to misguide them. He said the bills would remove middlemen and liberate the farmers so they can secure the best prices for their produce.

Modi referred to Bihar chief minister Nitish Kumar and said that after coming to power in the state, he had abolished the APMCs. “Now the country will tread Bihar’s path,” he said.